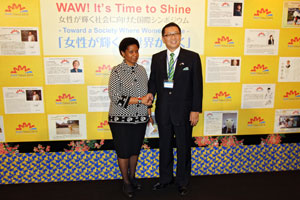 A commitment was made by Prime Minister Abe and the government of Japan to advance women’s position in society at the recently held World Assembly for Women (WAW) in Tokyo. At the high-profile meeting he reaffirmed his commitment to spend nearly 3 billion US dollars on women’s empowerment initiatives over the next three years. Outlining the importance of equal rights of all citizens to education and health, he called upon all participants in the event to proceed in “creating a society where women will shine.”

A message given by noted guest UN Women’s Executive Director Phumzile Mlambo-Ngcuka highlighted the urgency to advance women’s rights and gender equality. It also inspired the participants and working group sessions at the meeting to focus on creating concrete and actionable policy proposals for specific issues which are gender-responsive, including for public and private sector organizations, entrepreneurship and infrastructure.

The Beijing Declaration and Platform for Action, signed by 189 governments in 1995 and still considered the most comprehensive women’s rights agenda, was held up as an example of clear goals and targets to increase women’s position in society in 12 critical areas of concern such as the economy, health and other areas. The working groups created policy proposals to encourage women throughout all sectors, calling for specific changes within the country to usher women’s participation in the economy forward.

The event was earmarked by the announcement of the first UN Women Country Office in Japan, located in Bunkyō Ward, which was heartily welcomed by Japanese officials and civil society organizations.