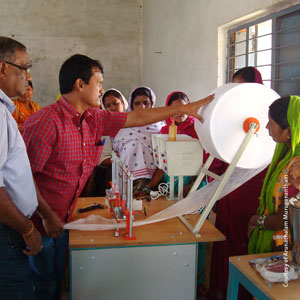 It all started on a hot summer day near the southern city of Coimbatore in India. Struck by his wife’s statement that she could either have milk or sanitary napkins, Arunachalam Muruganantham, a man from a poor household who had only gone to school till the age of 14, decided to do something. He wanted to get to the bottom of why women in his community were using rags instead of sanitary towels, rags so dirty, that he would not even use them to clean his scooter. Was this a financial problem? Or one that occurred due to the lack of information about women’s hygiene? The answer was both: after doing some informal research in his village, he found that less than one in ten women were using sanitary napkins. They were expensive and women could not afford them, and they also did not know the adverse health consequences of what they used instead, sometimes sand, sawdust, leaves and even ash and mud.

Many women in rural India still face social restrictions during menstruation: they are kept away from household duties, such as cooking or collection of water, as well as barred from taking part in auspicious events, or visiting temples.  Even without such barriers, Muruganantham’s research revealed that women and girls would disappear from sight during their menses, from their schools, their mom-and-pop shops, the panchayat meetings, from adult education centres, unable to rely on their homegrown methods of protection.

Becoming increasingly interested in ensuring women and girls could still attend school and go about their daily routines throughout their menses. Muruganantham invented a machine to make low-cost sanitary towels, refusing enormous quantities of money to sell the patent for the machine to any commercial company. The path he took was hard. Through the long years of hard work, he nearly lost his wife and mother who found his deep interest in women’s anatomy unnatural. He was publicly ostracized, and was on the verge of being kicked out of his own village. He risked everything he had to not only improve women’s health, but also went one step further to promote women’s ability to pull themselves out of poverty. He wanted to see women being self-sufficient and started selling hand-operated machines to women-managed self-help groups who now work as manufacturers, advertisers, sellers and customers. Each machine employs ten women in a country where the labour force participation rate as of 2009-2010 for women was just 29 per cent, according to the International Labour Organization.

Today his work has been covered by international media, from the BBC to Ted Talks, and his entrepreneurship showcased at top business schools. He chooses to work as a grass-roots advocate, spreading the word about social entrepreneurship and how this model can work, often more rapidly than traditional capital entrepreneurship. He also demonstrates the benefits of joining forces with women’s organizations to educate the community on women’s health and hygiene. The sanitary napkin machines have been installed in 26 states in India, and several other countries. Muruganantham's work has also inspired many other entrepreneurs to enter this long-neglected arena, including some that are exploring banana and bamboo fibre to create sanitary napkins, and furthering creativity and outreach through social entrepreneurship.

Initially, people in my village thought I was a pervert because I had to ask women for their used sanitary napkins in order to understand it better. I am not a woman, and to understand what the woman goes through, I needed to be in their shoes. After trying to persuade my family and female college students to volunteer to test my product in vain, I finally decided to test the product out myself. I used a football bladder [putting animal blood inside of it, poking holes in it so the blood would seep out to test the pads]. Everyone in my village thought I was crazy, even my own family. They have come around now though.

The youth of India need to believe in their education for society to develop and transform into an inclusive environment [in relation to the taboos and myths in India behind a woman’s menstrual cycle]. You are the power behind the future of India.

Women are god’s gift to mankind. To all the women across the globe, do not forget the power god has gifted you with. Take that power and believe in yourself more than anything. You [women] are the glue that binds people together; you have the power to bring peace into this world.