A ray of light for many 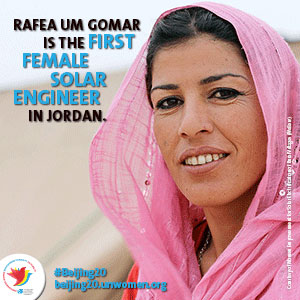 Born and raised in a remote, rural and poor Bedouin community in the eastern desert of the Kingdom of Jordan, she had to push against the conservative traditions of her village to pursue her dream of becoming a solar engineer. For Rafea Um Gomar, the path has not been easy, from living in abject poverty to facing persecution by her own family when she decided to challenge gender roles and step beyond the boundaries of her household. But she was not one to give up. She wanted to use updated technology to power up her village, stimulate women’s role in the local economy, reduce poverty and provide a better life for her four daughters and her community. Rafea Um Gomar, a brave Bedouin woman from a rural village has not only become the first female solar engineer in Jordan, but she has also set up 80 solar installations along with co-engineer  Sahia Um Badr, providing electricity to her village. Today she is an elected leader, a role model and a teacher in her community, training many others how to use sustainable energy.

Um Gomar and Um Badr were given the opportunity to attend Barefoot College in India, where rural women, often with little or no education, come from around the globe to receive training to become solar engineers. The College gives women the skills to develop a source of income, influence within their villages and the ability to use clean technology to power households that have never had electricity. Um Gomar arrived back home after attending the college in India full of ideas to change women’s lives, and brought her newly gained, groundbreaking knowledge to the community with the aspiration of improving the socioeconomic situation of women living in the most isolated and inaccessible villages.

Recently elected as the first female member of her municipal council in Manshiat Al-Ghayath, an isolated area about 260 kilometres from the capital city of Amman, Um Gomar is a role model for her community and a source of inspiration for many women and girls who have watched her rise, overcoming unsurmountable challenges.  In spite of many barriers, her success serves as a reminder to her community that women can be achievers, can access the sciences, be strong community leaders, and can positively contribute to society. With the support of UN Women and the local NGO, Jordanian Friends of Environment Society, Um Gomar and Um Badr have set up 80 solar installations throughout their area, and are training other women to install many more.  Um Gomar’s next dream is to open a solar energy training cooperative to empower and train women from all over the world to fight poverty and become independent using a clean source of energy.

At the beginning, the biggest challenge I had to face was the community. I live in a rather conservative village, where the culture doesn’t allow women to be outside their houses, and where a woman’s existence is confined only to her home and to take care of the children. [There were major obstacles] to break this chain and the social barriers, to become independent and create a regular source of income for me and my girls. In addition, my husband was also a big challenge. Huge problems arose due to his misunderstanding of my need to become independent and, of course, the repeated visits to Amman, my travel to India and meeting all these foreigners are all aspects that are not perceived well in my culture. My husband repeatedly threatened to take away my children if I did not adhere to the cultural mores. It was very hard to overcome this problem and maintain relationships with my children. The determination to have a better life for me and my girls, together with my firm belief in the project, helped me to endure the struggle and make it happen.

My father [inspired me to be who I am today]. My father and my mother were different from other members of the community. Although they were hesitant about my projects at first, my father always supported my aspiration of becoming independent.  He is a high-ranking tribal leader in my village. So when he stood up for me and told me not to worry, I felt stronger to go out and do more.

Culturally, men aren’t any better than women in life.  Women are seen as an important component of the community in our culture but they are mainly expected to take care of the house, carrying out pastoral chores and attending to the children. In rural areas, women do not advance as much as women living in the city, where they are more active in their community. In a rural Bedouin community, women don’t have any significant, upfront role to play.  So imagine, now I can say that I am the very first female solar engineer in Jordan, which in my community is even difficult for a man to say. Indeed, not even men can aspire to achieve such an education.

First, I have been able to set 80 houses with solar electrified illumination. My ambition now is to open a training centre to train more women from other villages and maybe other countries to use the same technology. Second, I was capable of breaking the social taboo according to which women must stay home. I demonstrated to the community that women can go out to get trained and then train other women to produce and sell their products. This experience pushed me to do more, so I decided to run for the municipal elections in my village and I won, becoming the first woman member in the municipal council of my community.

The biggest message I can send to all young people is that the most important thing in life is education. You start by going to school and then, if you continue, you will see that good opportunities will open up for you. Perseverance is important. Learn, persevere and do well, it will come.

Have more trust in your own potential and be sure and confident about yourself, learn as much as you can. Here in schools whenever a girl learns how to read, that’s it, that’s enough for her and she must go home. This practice needs to stop. We need to go on, and learn, and learn, and make our lives better.