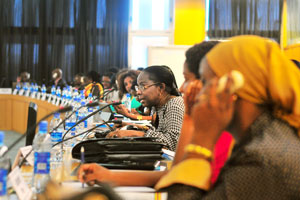 Participants at the CSO Forum in Ethiopia Photo: John Kaninda/UNECA

Addis Ababa - Civil society is known as one of the tenets in maintaining democracy, holding governments accountable for citizens’ rights in support of both national and international laws and legislative frameworks. Ethiopia’s strong civil society convened from 21-22 October to recommit to gender equality and to review progress made within the country on achieving advancement for women in line with the Beijing Declaration and Platform for Action. The forum, organized by UN Women and United Nations Economic Commission for Africa (UNECA), as well as The African Women's Development and Communication Network (FEMNET) and IPAS, focused on a range of important issues, such as women’s participation in the economy and as legislators.

The group undertook an analysis of the 12 critical areas of concern in the Beijing Platform for Action, and noted the achievements made in the social, political and economic spheres of life with several policy and legal instruments enacted by numerous governments in Africa, such as Constitutional Amendments to address inequalities in family and criminal law, as well as the African Union’s new gender policy and  the Maputo Protocol (Protocol to the African Charter on Human and Peoples’ Rights on the Rights of Women in Africa).

However, it was also noted that progress has been painfully slow, and fatigue amongst those leading the women’s movement, partially due to a lack of financial resources, is growing.  Noting that inequalities still persist in not only in Africa, but worldwide, the Director of FEMNET Dinah Musindarwezo, underscored that the review process presents a, “key opportunity to voice women’s priorities in emphasizing the demands made 20 years ago.”

The Representative from UNECA Thokozile Ruzvidzo, applauded the fact that nearly all African member states prepared comprehensive national reviews on the implementation of the Beijing Declaration, demonstrating African governments’ commitment to pushing the agenda for women’s empowerment further in the Post-2015 development discourse. She underscored the role African civil society plays in the efforts to accelerate the action on the commitments governments’ made in Beijing, and called for the active engagement and participation of civil society at the Ninth Regional Conference on Beijing +20 from 17-19 November 2014, leading up to the 59th session of the Commission on the Status of Women (CSW) in 2015.

Letty Chiwara, UN Women Representative to Ethiopia, AU and UNECA briefed participants about the various actions being taken by UN Women in the preparations for the regional review and the global consultations that are scheduled to take place during the 59th CSW in March 2015. She went on to reiterate the need for engaging young women and creating excitement about the Beijing Declaration, as well as reviving the women’s movement in Africa.