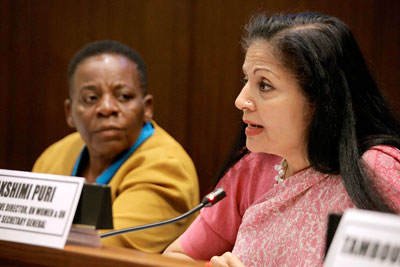 Addis Ababa – On the eve of the official Beijing+20 regional review, UN Women Deputy Executive Director, Lakshmi Puri, met with members of UN Women 12-member Civil Society Advisory Group in Ethiopia, and UN Women teams from the Africa region. Ms. Puri was in Ethiopia to attend the African Regional Conference on Beijing+20, which opened on 17 November at the Conference Center of the Economic Commission for Africa (ECA), bringing together representatives from 51 African nations to review progress made and gaps that remain in implementing the Beijing Declaration and Platform for Action 20 years after its adoption. The Beijing Declaration identified 12 critical areas of concern for advancing the goals of equality, development, justice and peace for women and girls around the world.

Commending the efforts of the strong civil society movement, she urged participants to maintain the strong momentum through broad-based mobilization efforts. “We are at an historic turning point, where we must take stock of the progress of women in Africa over the last 20 years. The Bejing+20 review is an African and global opportunity to take advantage of the post-2015 development agenda. Now is the time to get governments to commit to a goal on gender equality and make sure gender equality and women’s empowerment is addressed across all the post-2015 development goals,” stated Ms. Puri.

The newly-formed UN Women Civil Society Advisory Group in Ethiopia is a diverse and highly experienced group of eight women and four men from civil society organizations, academia, the private sector, and youth groups who advise UN Women on its work in Ethiopia. UN Women country representatives and team members from Ethiopia, Kenya, Uganda, Tanzania, Senegal, Mali, Liberia, Sierra Leone, and Nigeria took the opportunity to engage with the Advisory Group in discussions on current priorities, opportunities and gaps the organization faces on the ground.

Ms. Puri encouraged the civil society group members as well as UN Women Africa teams to continue their work with all actors on the ground across the continent saying, “I’m very inspired by all of you.” She called on the African leaders to join in and take the lead in making gender equality and women’s empowerment a lived reality through the reprioritization of the gender equality agenda in the post-2015 development framework. “This can’t happen without civil society playing its part in advocacy. To change the game, we need to reignite a global movement of solidarity on gender equality and women’s empowerment,” she concluded.

The African Regional Conference on Beijing+20 is currently in progress, and will put forth its recommendations later this week.