In Uganda, reaffirming women’s economic empowerment in the lead up to Beijing+20 reviews 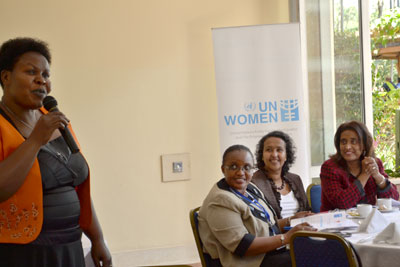 Kampala – The government of Uganda hosted a meeting of representatives from the Ministry of Gender, Labour and Social Development, civil society organizations and high-level participants from the private sector and the government. With a focus on women’s economic empowerment, one of the critical areas of concern of the Beijing Platform, the target was to compile concrete recommendations for the government and influential figures to scale up women’s progress in the financial sector. The meeting organized by UN Women, UNDP, and the Uganda Women Entrepreneurs Association Ltd (UWEAL) was held as part of the Beijing+20 campaign to galvanize efforts from key stakeholders in ramping up microcredit, business and trade policies and frameworks that reflect equal involvement and access to both women and men. Though the Beijing Declaration and Platform for Action was adopted by 189 governments nearly 20 years ago, yet the critical areas of concern highlighted in this blueprint for women’s rights still remains relevant, and women’s participation in the economy has been a particular focus area for Uganda.

Maggie Kyomukama, the Assistant Commissioner of the Ministry of Gender, Labour and Social Development highlighted the Uganda Gender Policy, adopted in 2007, and underlined  government-backed programmes that  empower women in the economy. She said that the Gender Policy focuses on many means of livelihood and employment for women, as well as macroeconomic management at the international level. “Women stay lost in small and medium scale enterprises, but we have role models who show us it can be different. We have to help more women become successful internationally. It’s your responsibility to transform the rural communities where we come from,” said Kyomukama.

Participants made valuable suggestions to improve the situation for women in Uganda, such as changing attitudes and opinions about women working outside the home and owning businesses, men acting in solidarity with women, and one-on-one mentoring programmes for the younger generation. The Uganda Bureau of Statistics presented an analysis of women’s time use, increasing participants’ understanding about the bottlenecks in women’s advancement in the economy today. There were also suggestions about legislation to bind financial institutional policy towards offering support and employment specifically to women. 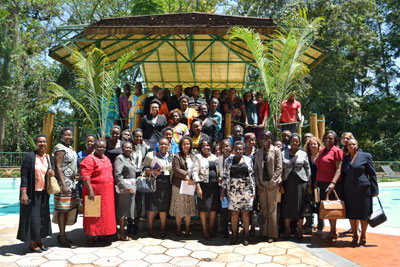 Participants at the Women and the Economy Breakfast Meeting, 28 October in Kampala. Photo: UN Women/Nadine Kamolleh
To speed the progress towards women’s full and equal involvement in the economy, the recommendations were presented to the internationally known women and child rights activist Graça Machel, who is widely known as Mozambican leader and widow of the late Nelson Mandela, as well as to the government.

The recommendations included the creation of a guaranteed fund for accessible and affordable financing for women’s businesses, increased capacity building, an innovation centre to enhance diversity of products available in Uganda, as well as a clear statement about the need for the government to commit resources to reduce transaction costs in business, as well as harnessing the use of ICTs and the media to share information in real time.

Graça Machel’s visit to Uganda was hosted by UN Women and the civil society organization, New Faces New Voices. She emphasized the fact that though there is economic growth, millions of women have not benefited from it, and stressed that there must be a change soon that reflects equity for all.