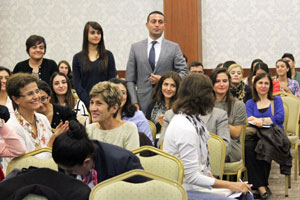 NGO Networks and UN Agencies came together to commemorate the International Day of the Girl Photo: UNIC Ankara/Tuba Coskun
Ankara -The International Day of the Girl Child on 11 October was celebrated in Ankara, Turkey, a bustling metropolis and the capital of the country. This event was held as part of the Beijing+20 campaign in commemoration of the Beijing Declaration and Platform for Action. One of the 12 critical areas of concern in the Beijing Declaration is the girl child, focusing on her specific needs and rights in health, nutrition, education and the pervasive issues of violence and discrimination against girls.

UN Agencies and over 150 organizations came together on the International Day of the Girl Child to applaud successes in ending violence against women and girls, such as being the first country to sign the The Council of Europe Convention on Preventing and Combating Violence Against Women and Domestic Violence (Istanbul Convention), but also to devise active  steps that still must be taken to prevent violence against girls on a national scale.

A recent study revealed that 11% of girls and young women reported having been forced to have sex or perform other sexual acts against their will by someone other than an intimate partner before the age of 15 in the country. This percentage falls to 6% for girls and young women after 15 years of age. According to the Turkish Statistical Institute, the marriage statistics in Turkey illustrate the scope of child marriage, showing that 24% of all women married were under 18 years of age at the time of the marriage. 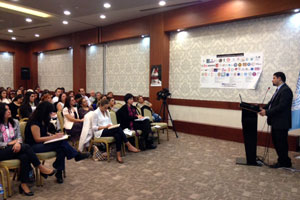 Calling all participants at the event to strategize on the strength of gender equality through the legislative system, further discussions were had on investing in the development of adolescent girls and fostering an environment where girls enjoy their right to freedom from violence, exploitation, abuse and neglect, as well as their right to education.

Several participants spoke up about their experiences of girlhood, and how skills and education had opened career possibilities. "Soccer helped me with continuing my education which can be difficult for girls in Malatya [a small city in eastern Turkey]. Being a licensed soccer player offered me the opportunity to attend university in the physical education department," said Ilknur, a girl from the Malatya Girls Soccer Team - supported by UNFPA under a UNFPA-UNDP joint project. Other girls and women called for the government to provide specialized services and increased protective measures for girls, including girls in the marginalized Roma ethnic group, those living with mental or physical disabilities, children of lesbian, gay, bisexual, transgender and intersex parents, and those who are negatively affected by seasonal agricultural migration.

Zeliha Unaldi, the gender specialist in the UN Resident Coordinator’s Office in Turkey shared a poignant story:  “When I was in Batman (a city in eastern Turkey) for a project, I heard a story about a 15-year old girl in one of the villages who was forcefully married to a 55-year old man. She needs to visit the doctor one day and leaves her village for the first time. The doctor says, ‘Why did you let something like this happen? The girl replies, ‘I would have rejected [the offer] had I known that the world was so big.’ That’s why we’re trying to explain to everyone that the world is big, and every girl child deserves the opportunity to see how big it is.”