Leading the police service, ending violence against women her motto 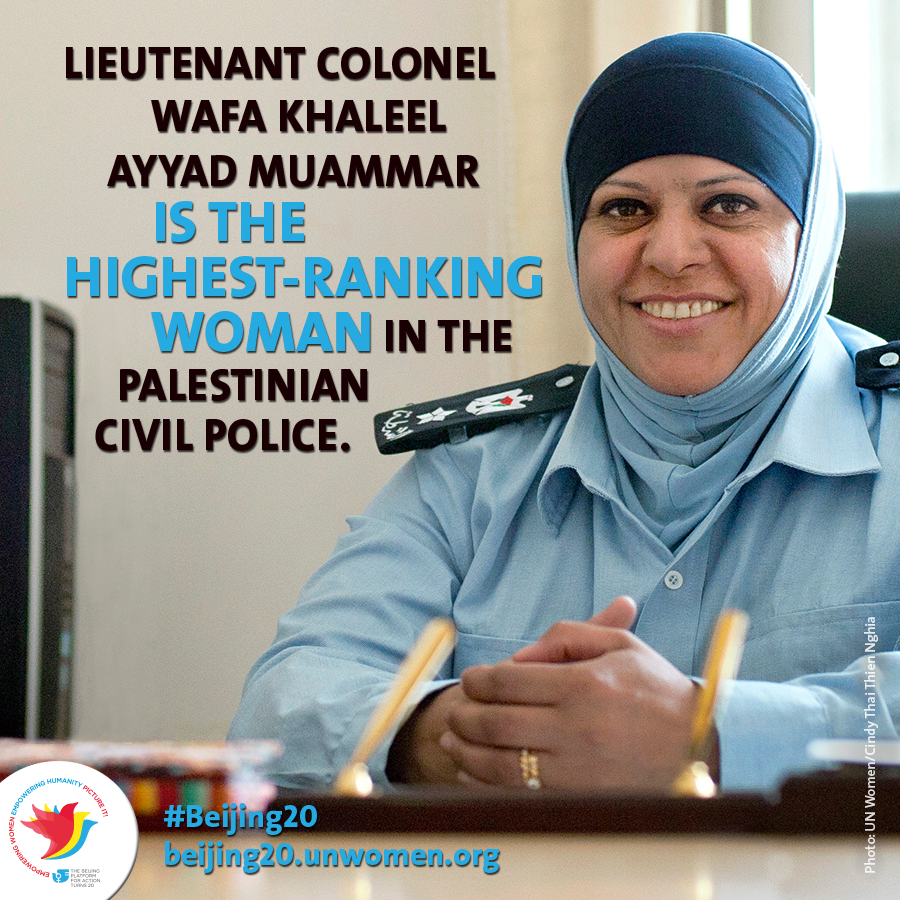 Throughout the strife and humanitarian crisis around her, Wafa Khaleel Ayyad Muammar, 43, was among the first generation of women to enter the Palestinian Civil Police (PCP) right after its establishment less than 20 years ago. Today, as head of the Palestinian Civil Police Family & Juvenile Protection Unit, Lieutenant Colonel Wafa Muammar is the highest-ranking female officer in the police, in spite of societal pressure to give up on her dream to serve the country through her work. Palestine, at just 17 per cent, has one of the lowest rates of female participation in the labour force globally. Muammar, a proud wife and mother of four, has had the courage to build a successful career in parallel, leading the way for other women in the police. She proved to many what women can achieve, even in the midst of intense conflict.

With civilian casualties mounting on a daily basis during the Second Infantida lasting just over five years, determination was her only weapon. She earned her Master’s degree, while pregnant, often walking through hilly roads and dangerous terrain, up until one week before the birth of her second child.  Always knowing that she wanted to be a police officer, she began her police training right afterwards, never letting the challenges of living in a conflict zone deter her.

The turmoil around her only served to strengthen her goals, and amplified her growing concern to keep women and children safe from domestic violence. Her job today allows her to ensure protection from violence for many women and girls, and she instills the same mission in her staff. Here, she speaks about her struggles to reach her goals, and how never giving up can change not only one’s life, but the lives of many others.

First and foremost, my family! As a mother of four, I will not be standing where I am today without my husband’s support. I also come from a very supportive [extended] family who has always felt pride in all my achievements. [A few other] women who entered the Police Service around the same time as me might have had to fight for their families to accept it. That was not my case. That is the reason why I kept and am called by my middle name, Muammar. After all they did for me, I do not want to forget where I come from. It all starts with the education you are given and how your personality is built, and thus your family.

How has being a woman affected your road to where you are today?

Society still believes in traditional jobs for women, like teaching, while the Police Service is perceived as a community of males, which represents power and strength, where a woman will have to give up some of her femininity in order to fit into such a force. When I started going to the street in uniform, it brought remarks, comments or even accusations. In the office, men tended to look down on us. They kept us in the office, doing clerical work, archiving. They did not trust or believe in our capacities to take action and responsibility. The Police Service is a sample of the bigger society, with its traditions, its understandings. Still, with time, we have proved we are able to be successful in all walks of life, this profession included. This is reflected with women being now offered high or senior positions in the police.

I am extremely proud to be at the head of the Family & Juvenile Protection Unit (FJPU) and that there is a Family & Juvenile Protection Unit in the police. The FJPU has really contributed to changing the perceptions of the police in society. The statistics speak for themselves. We went from 55 domestic violence cases reported to the FJPU in 2012 to 3,660 in 2013 [as reported by the Palestinian Civil Police]. Police are the reflection of society. Our society would look positively at a woman who endures her husband. If she speaks publicly she becomes an outcast. This way of thinking was also reflected in the Police Service. Many women avoided going to the police because going to the police to lodge a complaint might bring a big loss for the women: she will lose her children, her family and the respect of the people in society. With the FJPU, we are changing perceptions, and making the combat on violence against women as a national cause.

Palestinian society was and is still ruled by certain traditions and norms that are rather patriarchal. Whatever path a woman decides to take, she will have to exert a double effort compared to men. Palestinian women have always had to prove themselves. That is why we as women must show solidarity with each other and help each other in order to achieve what we pursue, be it access to justice or realizing our aim to build state institutions. Today, women in the Police Service are more accepted and even celebrated as leaders and I am proud to be one of those who led the way.

What is your message for other women/girls who may be inspired by your journey and achievements?

Things are changing and Palestinian society is more open. Many women had the courage to accept jobs with a lot of responsibilities. But you cannot take a position of utmost responsibility and decision-making, achieving your wishes and dreams, without sacrifices. I accepted it, while at the same time being a wife and a mother of four. However, having successful women in high-level positions encourages women to take the same path. I encourage other women to enter the Police Service, it is really important for the community and society. It remains the monopoly of men but women police have to be here and serve the women of the society, ensuring that they receive good service and access to justice.