A crusader of human rights and dignity 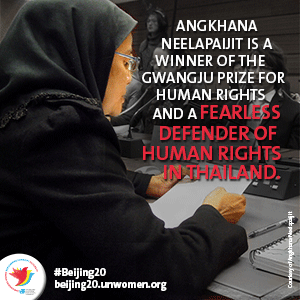 Angkhana Neelapaijit had imagined a life much different from the one she has today. The sudden disappearance of her husband, Somchai Neelapaijit, a human rights lawyer, changed the course of her life and took her on a path she had never thought she would travel.  From a homemaker looking after her husband and five children, she turned into a fearless defender of human rights, working tirelessly to bring back her husband, and supported many others whose rights were violated.

Winner of the Gwangju Prize for Human Rights, recognizing those who have contributed to advancing human rights, democracy and peace, Angkhana Neelapaijit was also honoured by the National Human Rights Commission of Thailand.

Angkhana Neelapaijit was placed under the government’s witness protection programme following her husband’s disappearance in 2004, and has received multiple death threats for both her own and her husband’s representation of controversial legal cases. In spite of the turbulent political landscape in Thailand, she has not been deterred from championing human rights cases including alleged rape of young girls by soldiers, forced and child marriages and disappearances of people of multiple ethnicities and religions during governmental coups.

Neelapaijit is the Chairwoman for the Justice for Peace Foundation, and has been termed "a leading human rights defender in Southern Thailand," by Amnesty International. Neelapaijit story was the subject of the reputed documentary ‘Unjust,’ in 2011, and the film was given a Special Jury Award at The Hague's Movies that Matter Festival.

Is the fact that you are a woman part of what has allowed you to achieve all that you have accomplished?

Yes, as a woman it makes it easy for me to talk with people. I can build alliances and create channels to give voice to the voiceless. I have spoken to hundreds of survivors of human rights abuses and organized support for families in despair. Never having lost hope in the political and judicial system, I have worked with stakeholders across all sectors to influence changes and structural transformation to ensure Thailand lives up to its promises and obligations.

What were some of the greatest obstacles you had to face to get where you are today?

Like anywhere else for those who work to promote human rights, I have often been challenged by unknown people about my work for human rights and rights of women left behind. As a Muslim woman who works on women’s rights issues, personal security is my concern.

Tell us a bit about your childhood, your ambitions and who inspired you to be who you are now?

I was born into a Muslim family in Bangkok. Despite growing up poor, my parents placed a high value on education and sent me and my sisters to good primary and secondary schools, leading me to receive a scholarship from Mahidol University to study for my nursing degree in 1976.

In October 1976, I was a witness to the Thammasat University Massacre, or Massacre of 6 October 1976.  Students were protesting against the return to Thailand of former dictator Field Marshal Thanom Kittikachorn. This caused the death of numerous students and triggered their flight into the jungle - students whose commitment and strength have continuously inspired me to work on human rights, justice and peace.

What do you believe is your greatest contribution to society and your community?

I believe that it is absolutely necessary to combine the local level work with the national, regional and international level. I make the connections between the work with individual survivors and their families to the UN and government agencies. I can bring the painful stories from the ground to the national level and the United Nations High Commissioner for Human Rights.

What is your message for other women and girls who might be inspired by your journey?

I want to say that actually, most women experience conflict and violence in a different way than most men. They also develop unique skills and expertise for resisting, addressing and preventing conflict.  Work on justice and peace cannot afford to neglect constructive contributions of women. You should not lose hope and always be strong and courageous to make changes.