Fighting for justice, for all 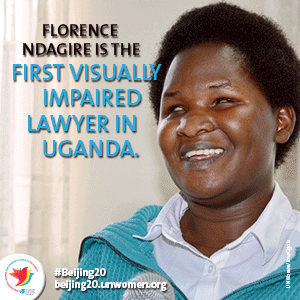 As a youngster, she was often at her father’s side, discussing current affairs and the evening news. Her father would ask her to give him a recap of the evening news, and she wouldn’t miss out on this opportunity to show her knowledge, especially in a world that often ignored the visually impaired. Florence Ndagire became the first visually impaired lawyer in Uganda, a country that though modern in many ways, does not often create educational curricula and materials for the visually impaired. She broke through several barriers and serves as a role model for many, including those with disabilities. She is currently on the Board of Directors of the National Union of Women with Disabilities Uganda and also as the Chair of the Regional Civil Society Advisory Group for East Africa, which provides guidance to UN Women.

In one of her nightly news sessions with her father, she listened to an interview with former Chief Justice, Francis Ayume, who spoke about human rights so passionately that it inspired her to become a lawyer. She decided to champion human rights for all people, especially those with disabilities. This decision shaped Ndagire’s life and brought challenges including being ridiculed for her sightlessness. Her mother was accused of being ‘cursed’ and bringing misfortune to the clan for bringing her into this world. Her parents’ unwavering support got Ndagire through those tough years. They raised her with the same encouragement they gave to their other children, all of whom were born with their sight.

Ndagire received a government scholarship to study law. The only visually impaired law student out of 450 students, she became frustrated with the lack of materials the university gave her, and could not afford the expensive equipment she so desperately needed to begin her long journey to become the human rights advocate she knew she could be. Eventually, a missionary group bought her a laptop that could read out written materials, which helped bridge the learning gap between Ndagire and other students.

Working throughout law school despite her education being sponsored by a local priest, she provided cleaning services for the local church and bided her time until she could graduate and start her path towards justice and equality for all in 2008.

She is a role model for many, even outside of her legal work. Ndagire climbed Mt. Kilimanjaro in 2010 to raise funds for children with disabilities through a local charity, and managed to climb up to 3,850 metres, 850 metres above the point where many stop due to mountain sickness, brought on by high altitude. Defying public perception of the visually impaired, Florence Ndagire continues to push boundaries, including how to improve the rights of people with disabilities.

How do you think being visually impaired has impacted you?

I went to an integrated school as a child – one with children with and without special needs. It was a boarding school, but I learned how to be independent there. Once I got to law school, I didn’t let anything stop me. I was the Minister for Disability at my law school, and graduated and competed with other students. I represented Uganda in the inaugural African Youth Forum in Entebbe, Uganda in 2010, and that compelled me to keep rushing towards my dreams.

There are, unfortunately, many things I can’t do on my own, such as crossing the street or reading a newspaper. But my sense of hearing and smell compensate for this! But I have never allowed my blindness to make me feel inferior. Both my mother and father also never made me feel different from my siblings. Now I am a mother of two children under the age of five, and that has its own day-to-day struggles, but I am managing it with the supportive help of my husband.

Did you work for law firms after you graduated from law school?

Yes, I tried working for law firms after graduating, but it was not easy. My goal was to fight for human rights in whatever capacity I could. In 2009, I got a job as an advocacy officer with the Uganda Society for Disabled Children and in 2012, I moved to Light for Blind [an NGO] where I currently work. I was also granted a fellowship at the Open Society Foundation in the U.K. to study the legal system further.

What do you consider the greatest barrier to success for people with disabilities?

Attitude! Attitude! And this is not just for persons with disabilities, this is for all. I always tell people that they must do what they need to do if they are to succeed. The moment you start thinking that you cannot do something because of whatever reason, this is when you start encountering self-imposed barriers. My parents were very empowering and they did not treat me in a special way and this helped me to consider myself as able to do what my siblings could do. However, there is a need for policies to be put in place that take care of the interests of people with special needs. For instance, if I did not get the support I got from Mill Hill Missionaries, I might not have been able to do my law degree.

What would your message be for women and girls today?

Again, attitude! Attitude! You must believe that you can do something in order to do it. There is no room for self-imposed barriers here!