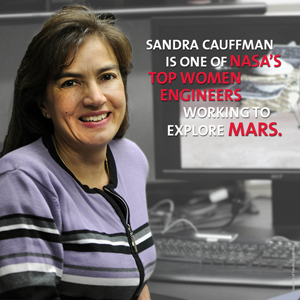 Growing up impoverished in Costa Rica without even a roof over her head, few could have predicted the career and life Sandra Cauffman has today. She is the Deputy Project Manager on the Mars Atmosphere and Volatile EvolutioN (MAVEN) mission at the National Aeronautics and Space Administration (NASA), Goddard Space Flight Center, in the United States, devoted to understanding Mars’ upper atmosphere.The daughter of a domestic violence survivor who escaped her abuser and had to take three jobs to support her children, Sandra’s mantra was her mother’s words “not to repeat the same story.” Today she is a role model, a mother and a NASA employee, who is supporting NASA’s quest to explore the red planet.

What were some of the biggest obstacles that you had to face to get where you are today [NASA]?

There were so many obstacles that I don’t know where to begin. The first thing is that I wasn’t born here in the United States. I was born in Costa Rica. Since I was little, I remember that I wanted to work in something related to space, and I didn’t know about NASA when I was 7 years old. I was watching the Moon landing and I told my mom: “I want to do that someday”. My mom could’ve said that it was impossible, but instead she was very encouraging. She said: “You never know; the world goes round and round and if you work and study hard, you never know where opportunities are going to come from.”

My mom lost everything. We lost our house and ended up living in an office, but even with all the struggles that we had, my mom kept encouraging me to study, to get good grades and to continue to work hard. Even though she worked three jobs to support us, and I had to start working young, she always told me that I had to have the strength to push myself through everything.

When I graduated from high school, I wanted to study electrical engineering at the Universidad de Costa Rica, and the counselor told me that I couldn’t study that because there were no women in the electrical engineering programme. This was a big barrier that I encountered at that time. They told me that I should study industrial engineering, so that was what I studied. At the time, I was 17 and I thought that as long as I was an engineer it would be fine, so I told the counsellor “yes”. Three and a half years into the programme, I found out that I didn’t really want to be an industrial engineer. I wanted to be an electrical engineer. It was during that time that my mom met my dad. He is the man that I call father because he married my mom and adopted us legally. This was the time when things started looking up for us, and we all moved to the United States.

I left everything in Costa Rica, even my three and a half years of industrial engineering. I didn’t speak English and I had to figure out how to get back into college again. I took the Test of English as a Second Language (TOEFL). Even with the little English that I had from high school in Costa Rica, I scored 601 and I needed at least 600 points to be able to start college.

The first couple of semesters were very hard because the teachers spoke so fast that I was totally lost. I had to go back home to slowly review and study everything to understand and make the most out of the classes. After three and a half years I finally graduated from George Mason University with two bachelor’s degrees: in electrical engineering and physics.

Once I started working, at NASA’s Goddard Space Flight Center, I was one out of a handful of women in the project. I have been very blessed that all the people that I have worked with have embraced diversity. There have been a couple of moments when someone had thought that I was the secretary or commented that I should be at home and not working in engineering. Those situations were the exception and not the rule.

What have been the most important factors in getting you to where you are today?

The biggest influence in my life has been my mother, and all her effort, all of her work and all of the encouragement that I always received from her. She was a single parent and she raised my siblings and me by herself and she never let her head go down. She always held her head very high and moved forward. No matter how bad things were, she always saw the positive side of things. She always encouraged me. She told me not to let the negative comments affect me. Her motto was always move forward…keep on marching forward, and work hard to get what you want.

She empowered me to be what I wanted to be. My mother is my heroine. There is no doubt about it. My mother did everything that she could so that we did not repeat history. She was the youngest of 12 and she grew up an orphan because the older siblings didn’t want or could not take care of the little ones. She had so much strength and she transferred that strength to all of us. She is a survivor.

Being a woman, has that affected the path to where you are today, and how?

It is hard for a woman to work in a predominately male environment, and we [women] have to try a little bit harder, but things are evolving. I don’t think that we’re past it. I think that we need more women in high-level positions, but compared to 20 or 30 years ago, it is improving.

How do you cope with being one of the few women in your area of work, which is predominantly male?

Working for NASA has been an incredible experience and I have worked hard to be where I am; and I admit that I had to work harder because I’m a woman, but I’m here and I’m happy for what I’ve accomplished and where I am in my career.

MAVEN has been one of the projects with more women engineers. I’m very pleased to say that the project pays attention to diversity. We can’t wait to get to Mars!

Everything comes back to the people that you work with and the relationships that you create throughout your life in your career. I hope my greatest contribution is being able to pass on a little bit of encouragement and motivation to the new generation.

What message do you have for young girls today?

My message is to not be persuaded by negativism because negativism is ignorance. Saying that you cannot do something is negativism. It might be difficult; it might be hard but it’s never impossible if you work hard. Poverty is not an excuse because there are a lot of organizations, a lot of scholarships, a lot of help for people that really want to go the extra mile. If you really want something and you put your mind to it, and you’re committed to what you want to achieve, there will always be people there to help you. If you don’t want to do what it takes to reach your goal, no one will help you. If you really want to do what it takes to achieve your dreams, a lot of help will come your way. You just need to be ready for the opportunities that will come along. You can dream. Go for your dreams!