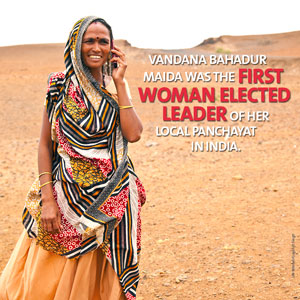 Mother of three children and a home-maker for more than a decade, few in her sleepy village would have imagined that she would be planning bridges and schools today.  But that is Vandana Bahadur Maida’s life in Khankhandvi, in the populous state of Madhya Pradesh, India. Despite family opposition and cultural norms that define a woman’s place in society, she was elected Head of the village council, the first woman Sarpanch. Her election was path-breaking for the village and  also for Vandana’s family—as she superseded her own husband who used to be a member of the village council but never the elected leader.

In India, quotas have spurred one of the greatest successes globally for women's empowerment and grass-roots democracy. Just a decade ago, women comprised less than 5 per cent of elected leaders in village councils. Today more than 40 per cent of local council leaders are women, bringing the number of women leaders at the rural level to more than a million.

While the other villagers go about their daily lives, working the farms, running to fetch water or take a reprieve from the hot summer sun in the afternoons, articulate and determined Vandana plans how to bring long-lasting change to her community. She is raising the awareness of her village council about government schemes that can support sanitation, health and education efforts for her village. With a strong record of results, today she is seen as a leader who delivers on promises. Her council has built a village pond to counter the chronic water shortage that her community used to face, as well as the first school, so that the village children are not compelled to drop out of school the way Vandana had to, after class 8  [8th grade].

What do you think have been the most important factors that have helped get you where you are today?

My interest in social development, my husband’s experience of being in politics at the Panchayat level as panch [member], my family’s support and most importantly the technical guidance by UN Women through trainings about the provisions of various government schemes helped me in performing my roles and responsibilities as Sarpanch [head of the village council] and to unturn every stone which is acting as a hindrance in the development of the Panchayat [village council].

What were some of the biggest obstacles in reaching where you are today?

The community members opposed my candidature for the Sarpanch election. They were of the opinion that ‘how can a women run a Panchayat?’ [My] relatives were also not in favour of my candidature for the Sarpanch election. Previously my husband was panch of the same panchayat, so many community members objected, asking: ‘will she sit on a higher post that of her husband?

My ambition was to work for the development of the community and to contribute for it within my capacity. My dream was to do something for improving education. Fortunately, I got the chance to participate in the panchayat elections and I won with a good margin and finally I got the opportunity to work for the advancement of my community.

How do you cope being one of the few women in your area of work, which is predominantly male?

I experienced such problems in the initial days of becoming Sarpanch! Male members were opposing my actions and decisions as I was completely unaware of the roles and responsibilities of Sarpanch and about the provisions of government schemes. But later I developed an understanding of these things and now the community members support me in every work of the Panchayat.

What do you believe is your greatest contribution, to society/your community?

I have ensured many developmental projects in my panchayat, including many dug wells, hand pumps, roads, and toilet construction in the village. Some major works done by me include construction of a pond in the village (as water scarcity was the major issue of the panchayat), construction of a primary school (as there was no school in the Panchayat and I was very interested in promoting education and in providing education to the children of the Panchayat) and construction of aaganwadi centres which are government sponsored child-care centres, in the faliyas (areas) where there was need of such centres, in the Panchayat. More importantly I [have] instilled an interest, a zeal in the people about education, sanitation, gram sabha (village meetings) participation and now people [have] got an understanding of the importance of education, importance of having toilets at home, importance of participation in Gram Sabha meetings. Now people actively participate in the meetings and raise their issues and make demands under various government schemes and I think this is my biggest achievement.

Do what you think is right for you. Be confident. Get the technical knowledge of whatever you are planning to do and lastly, let others criticize your efforts – they will surely appreciate your efforts whenever you will achieve success.

What is your message for other women/girls who may be inspired by your journey and achievements?

Be confident. Do whatever you are planning to do. The members of this patriarchal society will definitely oppose every action of yours. They will criticize you, make fun of your actions, but finally it is you who are going to implement your planning. Once you achieve success, everyone will start appreciating your efforts. So just concentrate on your work and do it to the fullest.