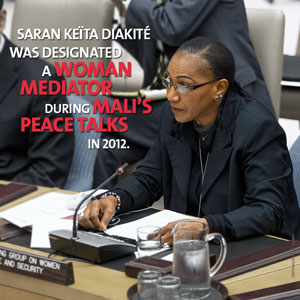 The stories of gang-rape, forced marriage and fathers being forced to rape their own daughters at gunpoint keep her awake at night. Saran Keïta Diakité has listened to countless women recount the atrocities that the people of her war-torn country (Mali) have endured at the hands of armed groups since a military coup d’état in March 2012. In April 2012, she was one of only a handful of women who took part in peace talks in Ouagadougou, Burkina Faso – as women have slowly been making inroads at peace talks around the world.

“During that time, I can assure you most sincerely, our voices were clearly heard. All the concerns that we raised were taken into account in the resolution, in the final Ouagadougou Declaration,” she recalls.

“If you want to negotiate, you have to include everyone. You cannot undertake negotiations and leave out over half the population. Women are the key to peace. Women understand the value of life. Women love life. Women give life. Women save lives. And it’s women who are prepared to give their lives so that our lives can be born of theirs. … Negotiating is what defines women. Conducting negotiations without women spells failure. It is not possible to negotiate without women.”

A lawyer who specializes in international law, Saran’s own career path in a traditional society was not an easy one. But today she is President of the Malian branch of the NGO Working Group on Women Peace and Security (Réseau Paix et Sécurité des Femmes de l’Espace CEDEAO).

“When these women talk about what happened, it’s appalling. The victims’ ages range from 9 to 70. Imagine the horrors that these survivors have endured!” she says. “It’s true to say that rape is being used as a weapon of war.”

She uses her legal skills to educate and empower war-affected Malian women and, ultimately, to seek justice. Her NGO assists survivors of violence, with free access to psychosocial and medical care, legal counsel, even job programmes for displaced women and girls. She also lobbies for women’s participation in conflict-resolution, peace negotiations and on post-transition bodies.

Saran has since echoed the unheard voices of Malian women and urged their active involvement in peace negotiations at many high-level fora, including at the UN Security Council’s Open Debate on conflict-related sexual violence in April 2013.

“Women are at the heart of the matter,” she says. “Their active involvement is absolutely obligatory, and I mean active. In all the phases of crisis management, women must be involved. A crisis managed without women is going to fail.”