Fighting the spirits, to defend and protect 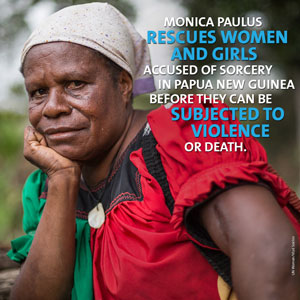 Accusations of sorcery are widespread in the communities of the highlands in Papua New Guinea. Often for deaths or illness, for theft or accident, the cause is believed to be sorcery, with the villain more often than not being allegedly a woman. Protecting many such wrongly accused women is human rights defender Monica Paulus. Fearless, determined and outspoken, she rescues women and girls accused of sorcery, preventing many from violent punishment, or death.

Despite overwhelming public opinion and community beliefs, Monica works to get the women protection, often by relocating the accused out of the communities. She moves heaven and earth to ensure that they then have access to justice, going to the courts and not resting until the perpetrators are punished. There are some wins and some losses, but Monica is not ready to give up or give in.

“There are two factors that helped me get where I am today; willingness in my heart, and having been a victim of violence myself. There was no one around for me when I was a victim so I want to be there for other women. We must stand up for one another, and remember there is a need to do so. Victims are so happy there is someone there to defend them, to stand up for them. That is what drives me to defend human rights.”

With each passing day, her conviction to protect and defend the accused women grows stronger.

“You must never put yourself down for being a woman. Anything you think you can do, you can do.  We must stand together and respect and defend one another’s human rights. When there is no respect, there is no balance in the world, ” she says.