The unstoppable police officer of Timor-Leste 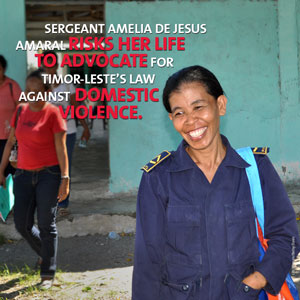 The petite lady in uniform is a familiar sight. Although she doesn’t drive a car or ride a motorbike, long distances cannot deter Sergeant Amelia de Jesus Amaral. She will walk on foot, no matter how long it takes, when she gets a complaint from survivors of domestic violence. Winner of the prestigious Gender Equality Advocate Award of the Secretary of State for the Promotion of Equality in November 2013, Amelia, a police officer with the Vulnerable Person’s Unit of the National Police of Timor-Leste, is a powerful voice and a role model. In a country where women make up less than 20 per cent of the national police force, Amelia, who is a mother of two young children, is one of the longest-serving members of the Vulnerable Person’s Unit, which has a particularly challenging mandate, dealing with crimes that are often accepted culturally within society and where survivors face various barriers in accessing justice.

She faces risks and threats every day, but the feisty officer shrugs them off as just hazards of the job. They only serve to strengthen her commitment to support survivors of violence. She is one of the best advocates in the country for the Law against Domestic Violence, spreading information about it in rural communities around Covalima, a seven-hour drive from the capital of Dili. Handing out her phone number after outreach meetings, her commitment shines through as she tells the community members: “If you are being hurt, call me, I will come and pick you up and take you to a safe place. I will help you report the police who don’t take your calls to a higher authority. It is our job to take your case seriously and to help you get to the Prosecutor’s Office.”

What is it that drives her in her quest to ensure justice for all who have been wronged? It is her sense of duty to serve that guides her every step as a police officer, a job she dreamt of since childhood: “We, as police, are paid by the State to perform these duties,” she says. “I am here to help survivors use the referral network, get medical treatment if they need it, and get counseling to be able to feel better after their trauma. I help them take their cases through the Prosecutor’s Office. This is why I became a police officer.”

Despite challenges, her voice in the community is influential and her message to other women is simple: “Through education, there can be good changes; without an education it is difficult to increase the quality of the nation…I encourage my fellow women so that they do not lose out, if there is a difficulty, they can find a solution, they can resolve problems as a group.”