Trekking across the globe for environmental change 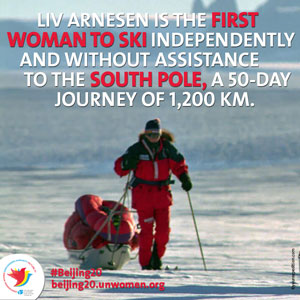 On her first trip to the South Pole, she started at Hercules Inlet at the southern end of the Weddell Sea, and arrived in the South Pole in just 50 days, a journey of 1,200 km. She says it is perseverance, patience and stubbornness that made the hazardous, yet dream, trek a reality.

A self-described typical teacher and mother of three in Norway, Liv Arnesen resides in a country well-known for its progressive systems. Norway ranks number one on UNDP’s Human Development Index, which measures health, education and income, as well as holds the top spot for its progress towards Gender Equality. However, a glass ceiling for women still exists, and Liv has been shattering this ceiling for more than 20 years.

She has incorporated environmentalism and education into her latest adventures, and has gathered a team of six women from six different continents to begin an expedition along India’s Ganges River. A woman with a mission, she is using this experience to increase awareness about the Earth’s decreasing supply of fresh water. The expedition group’s goal is to reach 50 million youth with their educational curriculum on the importance of water conservation. Featured in more than 50 international news media outlets, Liv and her expedition partner, Ann Bancroft, have established Bancroft Arnesen Explore, an organization dedicated to motivating people, especially women and girls, to reach for their own dreams. She shares some of these with us.

What were some of the greatest challenges that you faced in the early years of your expeditions?

On my first expedition skiing to the South Pole, I felt that I was moving into the men’s arena.  Norway has had two women Prime Ministers and many women politicians. But even here, I felt like I should leave the ski poles to the men. I didn’t get one Norwegian sponsor. Of course, things are changing now. Even still, I was asked [by men] all of these questions. “Have you served in the military?” “Have you pulled a sled?” And this was only 21 years ago! I just explained that I had been embarking on long expeditions in Norway, had crossed the Ice Cap, and was an experienced person. I think they wanted to … make me insecure. I am stubborn; it didn’t work. And I had been dreaming about the South Pole since I was 8 years old. This was my childhood dream and I realized this was my chance, so I took it.

How do you cope with being one of the few women trekkers?

It is still hard for women to get funding for certain projects in Norway and in other countries as well. We are still doing this and still struggling with funding. I think men probably have a different network for fundraising. I think women, at least the women I know, work for companies that are more human-oriented, companies that may not have so much money as other types. There are still a lot of macho men out there that don’t like women doing these things. But I persevere.

How did you start combining expeditions with educational curricula?

Throughout the first expedition, I just wanted to fulfil my childhood dream. Halfway through, I was thinking about how doing this was giving me more and more energy. I thought about my students, wondering where they should go and how to inspire them. I started writing a book for students, but then realized some of the kids who would need the book might not read it. Later, when I got an expedition partner, we decided to create a curriculum and post it online. Since then, the educational element has been integral to our expeditions.

I think my teaching is still my greatest contribution. I take being a role model seriously. I think about all the messages I get from kids, thanking me for showing them that it is possible to do these things. When you pursue your goals, you may hit a wall or meet people that don’t support you. It is important to be patient. I was a high school teacher, and I feel so fortunate to reach even more young people now [with our curricula]. I also adopted three girls. They are grownups now and good friends, and I have five grandchildren. My parents were a large part of this as well. I learned from them to be independent, get an education and to earn my own money. I had parents that supported that sort of thinking.

What message do you have for young girls today?

Chase your dream. Listen to your heart and your intuition. If there is something that makes the blood run in your veins, makes your heart beat faster, then it is important for you, even if your parents and friends don’t like it. Be patient. Make a plan. It might not happen in a year, it might happen in three or even five years. I waited from age 8 to age 41 to accomplish my dream. It was worth it.