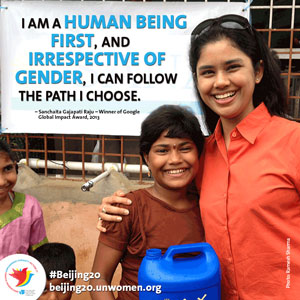 It all started with a visit to a rural Indian village. Sanchaita Gajapati Raju draws inspiration from her mother, who from a very young age instilled in her a deep civic sense and encouraged her to help those less fortunate. On a visit to an impoverished village, Sanchaita noted the lack of facilities and clean drinking water. Through her interactions with the communities there, she got a better understanding of their predicament and how technology could improve peoples’ lives by not only enhancing public health, but also through creating services that would allow people, primarily women, to spend less time collecting fresh water. Thus her organization SANA was born.

Sanchaita Gajapati Raju is only 30 years of age, but can already claim numerous accomplishments – she is a trained lawyer and political scientist, filmmaker and media professional. Despite the various accolades she earned in these competitive fields, she chose to leave a corporate job and establish an NGO focused on water and sanitation in a country where close to 60 per cent of the over one billion people in the country are forced to defecate in public due to lack of much-needed sanitation facilities.[1]

The NGO she worked tirelessly to create, Social Awareness Newer Alternatives (SANA), won the Google Global Impact Challenge in 2013, a prestigious award which is markedly different, for it is voted upon by the general public.

SANA’s first project was a Solar Powered Clean Water Purification Station that has produced over two million litres of clean drinking water to date. The solar powered water treatment station also acts as a bio-digester toilet, tackling the lack of sanitation facilities that plague many in one of the most populous countries in the world. With the ambitious aim of ensuring access to clean water and sanitation for the entire population, SANA is slowly and steadily expanding its efforts. It is currently providing ten villages with this innovation in the coastal state of Andhra Pradesh.

The most important factors are my family upbringing and education. I have been blessed with parents who have supported me in every which way and have instilled the importance of compassion in dealing with others. They made me understand the need, for those of us who come from a privileged background, to give back to society and create an inclusive and equitable world.

Although I was born in Hyderabad, Andhra Pradesh, I spent my childhood mostly in Delhi. I was greatly influenced by my mother, Uma Gajapati Raju, who was a Member of Parliament. I accompanied her at a very young age in the many social interventions she carried out in the rural areas for the less privileged and the marginalized. The biggest impact for me was when she took the Life Line Express [train] - a Hospital on Wheels with cutting edge medical facilities and top class doctors - to the remote areas of her constituency. This brought medical relief to thousands who otherwise would not have had hope ever of receiving modern medical treatment.

After I graduated, I joined my parent's media company and we did some exciting films – one in particular changed my life. It was a documentary on bringing best agricultural practices to small farmers who were not yet exposed to any modern farming techniques…watching the lives of these destitute farmers changing for the better, through this social intervention. This inspired me to set up my NGO - SANA Social Awareness Newer Alternatives.

I have always been brought up to believe that I am a human being first, and irrespective of gender, I can follow the path I choose. But I do realize that this is not true for the majority of women in my country. Therefore, I have resolved to address the gender issue by concentrating my social interventions in the area of sanitation and safe water, which are pressing issues for women and children.

Since I have been working in providing clean drinking water and sanitation to those who have been denied this basic human right for decades, I feel my greatest contribution has been that I have brought a sense of dignity to these citizens of India. And with this dignity is restored empowerment. Nothing devastates human dignity more than having to defecate in the open and drink contaminated water. It brings in its wake disease, stunted growth for children and medical expenses, which the family cannot afford. It also eats into productivity of these marginalized villagers, as every day of illness means they have to forgo their daily wages.

We work mainly with women and children from the lower castes [marginalized groups in India of the lowest social standing]. We have been able to bring about a sense of inclusiveness in these villages. We also train the villagers with basic skill development and give them new employment avenues.

What is your message for other women/ girls who may be inspired by your journey and achievements?

My message to other women and young girls is that they should educate themselves and follow their dreams. When women occupy positions of power and influence, they should leverage this to create a multiplier effect for others.