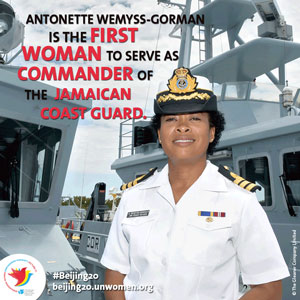 She was brought up by a single mother in rural Jamaica, in a family of modest means. Today she is the Commanding Officer of Jamaica’s Coast Guard, the first woman to attain the prestigious position in the island state, as well as the entire Caribbean region. Commander Antonette Wemyss-Gorman learnt early in life never to accept ‘no’ for an answer. Her mantra: “I can do that!”

“My grandparents and my mother made me believe I could be anything I wanted to be. When I was growing up, I felt I was the centre of the world because of the inspiration I got. I was socialized to think that I could do whatever I wanted to do, and that is how I have grown up and approached everything,” she says.

Growing up in the rural parish of Manchester, Jamaica, Commander Wemyss-Gorman says there was very little interaction with the military. Having moved to the city capital of Kingston to pursue undergraduate studies at the University of the West Indies Mona campus, a chance encounter with a retired defence officer encouraged her to consider applying for a post as an officer. “Once the idea came to me and I thought about it and I read up about the Jamaica Defence Force, in my mind, this was it. I was going to do it, there was no failing, and it was going to happen.”  That year, Antonette Wemyss-Gorman was one of two people who passed the JDF selection board from among 34 applicants.

At the time of her basic training, there were no women serving in the Coast Guard in a sea faring role. “Initially there was some push back, [they said] no, women cannot go to sea, you cannot serve on boats. Looking back at it, no, I do not think I really saw it as an obstacle, I saw it as a challenge. What do you mean I cannot serve at Coast Guard, why not?”

“At the time I joined, I realized that all the female officers were in support roles, basically office jobs, but what attracted me to the JDF was the prospect of being outdoors. My idea of what the military was, was not working behind a desk. When I realized women were only serving in support roles, it kind of drove me to say no, I do not want to do that. If I am going to be in the military, I am going to be a soldier, I am going to be out there doing what the guys are doing and I guess because I had the affinity for the water. I convinced myself that serving at the Coast Guard would be the best idea.”

An experience in her first year of service precipitated the journey for her to serve at sea. She had been detailed as the signaller, and was boarding a flight to fly to her destination to serve with a reserve platoon: “So, I am joining the aircraft with my weapon and my radio and I am told no, I must hand over the weapon and radio to a male, and I was most upset. I said, but I am the signaller. This is a huge radio, it is called a Manpack and it is so tall that you can barely see me. And I have been walking around with this radio for many weeks and they are now telling me to hand over this radio to a male soldier… and I said no, I am going.” And we were deployed.

Recognising her passion and fervour, the military took steps for her to join the naval college, and she enrolled in the Britannia Royal Naval College in the United Kingdom.  After completing her course, she joined the JDF Coast Guard as the first ‘Sea Going’ Female Officer to serve in the country. She was appointed Commanding Officer of Cutter Belmont Point in 2002, making her the first female ship captain in the Caribbean.

She notes that her progress to the highest ranks was not automatic, and was only possible because of, “very forward thinking commanders,” who allowed her to grow. “Because it was new ground and no one had done it before, I was constantly and acutely aware of the fact that I needed to excel and that I needed to be very good at what I was doing.”

Her reputation grew and more women have been inspired to join and serve the Coast Guard. They now have the highest ratio of female to male officers (one quarter of the unit) in the military. Over the years, she proudly notes that the Jamaican Defence Force has embraced the service of women in non-traditional female roles and their numbers have grown.

Her greatest contribution, she says, is her service to the people of Jamaica. For the younger generation, she offers this advice: “If you believe in yourself and you set your goals, and you work hard, you can achieve what you want to achieve. I am from rural Jamaica; a single mother, grew up with my grandparents in a humble home in the country, and 22 years later, I am the head of the Coast Guard.”