A brave crusader, opening many doors 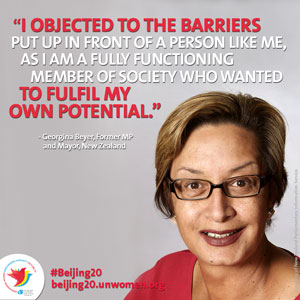 A true force of nature: this is how she is popularly known. Braving criticism and challenging discrimination and stereotypes, Georgina Beyer paved a new path when she became the world’s first openly transsexual mayor in 1995, as well as the first openly transsexual Member of Parliament (MP) in 2000. A long-standing human rights advocate, her legacy includes a long and powerful list of legislative reform.

Step by step, she worked with various marginalized and vulnerable groups, starting with indigenous groups that contributed to drafting one of the first bills for equitable natural resource management. She then played a key role in the passage of the Prostitution Law Reform in 2003, guaranteeing protection for minors and health services for all sex workers. Another agenda of hers, considered a first of its kind,  was to get lawmakers on-board to sign into force a statement making gender identity protection explicit under New Zealand's human rights bill, as well as advocating for the Civil Union bill, which was passed towards the end of her time as an MP in 2007.

Born a Māori, an indigenous New Zealand tribe, she spent most of her time in her youth working to become a recognized actor. Leaving school at the age of 16 against her mother’s wishes, she worked as an actor, entertainer and sex worker. She even won the prestigious G.O.F.T.A. award for a popular TV show, one of the most well-known awards for film and television actors. But she knew that this was just the beginning of her journey, and continued to push the envelope to affect change, both in law and attitude.

Filled with conviction to better the lives of rural children that had grown up like her in exclusion, she moved to Carterton, a farming area in the Wairarapa region where she worked as a radio host. She was eventually, due to her activism, elected as the Mayor twice. On the personal front, she underwent sex reassignment surgery at a time when people would say, “This is just not done.”

Documenting her life as a politician and famed actor, she wrote her autobiography, A Change for the Better, published in 1999. Here, she tells us more about how it felt to change perceptions, challenge stereotypes and rise to the top when most people told her it was impossible.

What were the greatest challenges you had to overcome to be in politics?
The conservative nature of the electorate would be the first thing. A person of my colourful past probably wasn’t considered to be the right fit for the district. There were people in the administration who didn’t want to see me there. People thought it wouldn’t happen, but it did. And that was that. For this very colourful character to waltz into town and become a part of politics was quite something.

The media were keenly interested in my past. Former sex worker, former drag queen, and they often didn’t get their terms right. The media saw the Mayoral elections for me as a sideshow in Carterton. There is a transsexual. It is not as if I was hiding that stuff, at all, ever. I would never let being a transsexual define me in being a functioning human being.

Some people have an attitude, we chose this lifestyle, and now we have these tragic lives. That’s not right at all. I had difficulties in my life early on and I still do sometimes. I chose to be true to myself, which didn’t gel with societies’ mores. I didn’t comply with their conventions. That’s my experience, not everyone’s experience. All of those obstacles I encountered in becoming the person that I am prepared me for politics. I had transferable skills. You are all out there soliciting for votes, what is the difference between that and soliciting for a client? There is no difference between what you do and what I used to do!

What have been the most important factors in getting you to where you are today?
I worked on the Resource Management Act, consulting with local Māori on behalf of the government for the first time in nearly 100 years. After some meetings and debates, we adopted that policy. That sort of helped to establish me. This broke down barriers and brought people closer together.  It dissolved some of the issues they had with me. Once they got to know me, this transcended the phobic attitude people may have had about me. The constituency was delighted with the breath of fresh air. People saw me as a little bit exotic, giving the old establishment a run for their money.

What impact did being a woman have on your career?
I was sometimes sidelined and excluded from the core of decision-making.

Some had a trans phobic attitude. It was hard to get over those barriers. You have got the issue with this, not me, I am fine with that. I want to get on with it.

What do you believe is your greatest contribution to society?
On the one hand, I am pleased with the work I did for my constituents as a Mayor and an MP. It is not an easy thing to do to keep up with all of the things you said you would do, and I did it. I went into this public life to prove a point. I objected to the barriers put up in front of a person like me, as I am a fully functioning member of society who wanted to fulfil my own potential. I am not going to back down on that because of peoples’ mores about my transsexuality. I got legitimately elected without any strings being pulled. I hope it inspired others like me around the world who took notice of it.

I also drafted part of the human rights chapter of the Constitution on the “third sex,” in Nepal, and I am proud of that.

I proved that things can be done against the odds.

What is your advice for young women today?
Have respect for yourselves and love yourselves no matter what your differences might be. Continue to be inspired to achieve in whatever arena you feel comfortable in and passionate about. Be considerate of others.

It is important that we don’t shut the door behind us. We should hold the door open to bring others through.

Related News
01/06/2015
Women’s health in the spotlight at the World Health Assembly
04/05/2015
Edith Lederer - Legendary journalist, breaking boundaries in the newsroom and beyond
04/05/2015
The time is now for media to make the future – on-screen and off-screen
01/04/2015
Women’s Health is Everyone’s Health
23/02/2015
Leading scientific innovations, making history
END_OF_DOCUMENT_TOKEN_TO_BE_REPLACED