Diversity of voices at Beijing+20 consultations in India 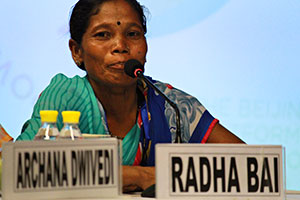 12 August, New Delhi- Radha Bai, started as a self-help group member of the Narmada Mahila Sangh, a federation of women’s self-help groups spread over 217 villages fighting violence against women in rural areas, and providing safe spaces to earn income and learn new skills. At the Beijing+20 India Civil Society National Consultation from 11-12 August, she voiced the experiences of thousands of grass-roots women from her home state of Madhya Pradesh. "After receiving gender training and understanding about what gender inequality entails, I would go back home and count the number of times that I was discriminated against. It was eye-opening, and I realized how much women suffer in a patriarchal society." She now works as a community mobilizer, training women on issues of patriarchy, their rights and entitlements, and the damaging effects of discrimination.

Supported by UN Women and led by Bejing+20 Civil Society Working group in India, the Beijing+20 National Consultation galvanized  India’s vibrant civil society, with participants from across the country speaking in their own languages, amidst intense discussion and group work to develop concrete strategies to accelerate growth and progress in women’s lives and liberties.

The event was punctuated by voices from the grass-roots women’s movements, the Indian Government, youth movements, policy institutes and the media, unanimous in strong messages of solidarity, collaboration and accountability. 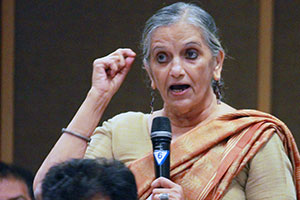 “Twenty years post-Beijing, it's time for us to seek accountability for implementation of the Beijing Declaration and Platform for Action and demand gender equality.  Gender equality is the cornerstone of the Indian Constitution and we need institutional mechanisms, political will and financing to achieve it. We need strong partnerships between the government and civil society to achieve gender equality in India," concluded Dr. Pam Rajput, Chairperson of the Beijing+20 India Civil Society Organizations, Civil Society Advisory Group, and Chairperson of the High-level Committee on the Status of Women for the Government of India.

Discussions ranged from issues such as disability and sexuality, class, caste, and its impact on gender issues. Focus was also on the penetrating force of the new electronic world and social media’s impact on feminism, which reached a pivotal stage with global outrage following the gang rape of a young woman in New Delhi in 2012. Addressing the issue, speakers highlighted areas of action. “Engagement with men is key, not just for mindset change but also to achieve overall equality. We must bring the issue of identities such as LGBTIQ (lesbian, gay, bisexual, transgender, intersex, and queer) while addressing any kind of violence. Issues such as portrayal and representation of women in the media have been relegated to the side, and must be examined,” said Dr. Nandita Shah, Co-Director of Akshara Women’s Resource Centre.

The results of the strategies developed at the Consultation will contribute to the regional Beijing+20 review process in November 2014 in Bangkok, and then feed into the global dialogue to be held during the 59th Session of the Commission on the Status of Women in New York in March 2015.