21 August, Kathmandu- “A nation cannot be fully thriving if women are not given their due space and their rights are not ensured,” said the President of Nepal, Dr. Ram Baran Yadav at the three-day consultation in Nepal’s capital to discuss progress on the landmark Beijing Declaration and Platform for Action. The meeting, held from 21-23 August, was organized in the lead up to the 20th anniversary of the Fourth World Conference on Women in Beijing in 1995, which will be commemorated in 2015.

Bringing together government officials, activists and experts, to share best practices and strategize on strengthening collective action through legislation, policy and advocacy, the UN Women-supported consultations were organized by Beyond Beijing Committee (BBC) and National Network for Beijing Review Nepal (NNBN), powerful civil society partners who have been advocating for legislation and policies that advance women’s empowerment and gender equality in the Himalayan nation. The President emphasized government policies such as the five-year National Strategy and Action Plan (NSAP) for combating gender-based violence, and the fast track courts for women, which were in the process of being established. 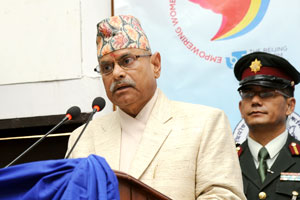 Sunita Magar, a vocal participant in the consultations from a village in Kalikot in the rural mid-western region said, “As women, we endure so much discrimination and stigmatization from society. I have often felt helpless, like I could do nothing. But now, after interacting with all the participants here and listening to women rights activists, I realize that there are platforms, organizations, policies, and campaigns that can improve the status of women. I am really glad I came here.’’

While many participants underlined the progress that has been achieved, some did note that despite positive efforts by the Government to continue progress forward from the Beijing Declaration, lack of proper coordination, monitoring and assessment have acted as hindrances to implement programmes that reinforce women’s multiple roles in society, and these need to be more effectively addressed.

Mr. Ziad Sheikh, UN Women’s Country Representative said, “Nepal has made significant achievement towards the Millennium Development Goals (MDGs), especially poverty reduction. Women have hugely contributed to this achievement as teachers, migrant workers, economists, lawmakers, through the agriculture sector, etc. With all of these achievements, serious challenges remain and what needs urgent attention is to end violence against women.” He further added, ‘’Women and girls can be whatever they want to be, whatever their country needs them to be; but equal opportunities and an enabling environment have to be provided.”