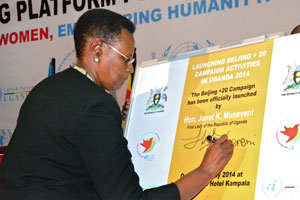 31 July, Kampala- “I was not yet born when the Beijing Conference was held, but the issues raised at that time are still affecting young girls like me today,” said Esther Sagaru, a 19-year old participant, echoing many of her generation at an event in Uganda, which brought together diverse groups working on gender equality and women’s empowerment.

The occasion was the national launch of the Beijing+20 campaign, supported by UN Women, in lead up to the 20th anniversary commemoration of the landmark Fourth World Conference on Women in Beijing in 1995.

“I am proud to be associated with the Beijing Declaration and Platform for Action. I was a delegate at the Beijing Conference in 1995, and I am happy to say that Uganda adopted key provisions of the Platform for Action through engendering the 1995 Constitution,” said Janet Kataha Museveni, the First Lady of the Republic of Uganda at the meeting. 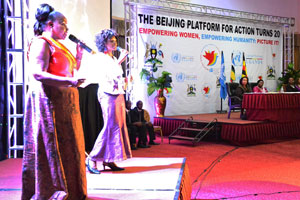 As part of the preparations for the 20-year review to be held in 2015, Uganda recently submitted their National Report on the progress the nation has made towards women’s rights and gender equality. Highlights of the report were given to attendees at the launch event to reinforce their advocacy efforts as they talked with various politicians, civil society members and concerned citizens.

At the event, Dr. Specioza Wandira Kazibwe, former Vice-President of Uganda and the first woman to be Vice-President in Africa underlined her support by recounting the key issues that were discussed at the Beijing Conference, and highlighted the need for increased women’s political participation. She also noted that although Uganda had registered considerable progress, galvanizing women’s contributions to the economy still needs to be prioritized in order to fully realize empowerment for women and girls.

The UN Women Country Representative in Uganda, Ms. Hodan Addou, echoed the sentiment and emphasized the need to invest in education for girls. “By keeping girls in school longer with quality education, we will empower young women to play their full role in society and build stronger families, communities and democracies,” she said.