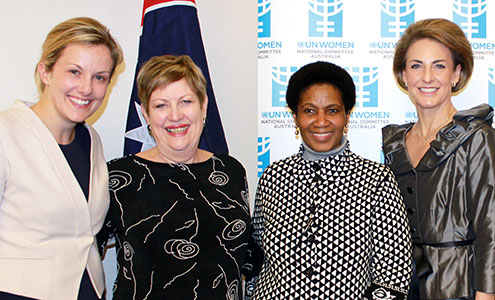 27 August, Canberra – During her first visit to Australia as United Nations Under-Secretary-General and Executive Director of UN Women, Phumzile Mlambo-Ngcuka kicked off the Beijing+20 campaign in the country, focusing on how Australians can be involved in an international conversation about progress made since the Fourth World Conference on Women held in Beijing in 1995.

“Empowering Women, Empowering Humanity: Picture it! is an invitation to every Australian to join the movement, take action, and make your voice heard. In your workplace, your school, your community, online and in the streets, let’s make gender equality a reality – now!” she said, in her speech at the official campaign launch at Parliament House in the Australian capital, Canberra on 27 August.

The Beijing Declaration, adopted by 189 countries including Australia, highlights 12 critical areas of concern for women’s empowerment. As part of the worldwide mobilization in the lead-up to the 20th anniversary of the Conference and Declaration, Australia’s Beijing+20 campaign will highlight four of these areas of concern in particular, which reflect the Government’s priorities, including: eliminating violence against women, advancing economic empowerment and opportunity, women’s leadership, and involving women in peace and security.

“These focus areas can improve the lives of women in our region, and will ensure we don’t wait another 20 years until gender equality becomes a reality,” said Senator Michaelia Cash, Minister Assisting the Prime Minister for Women. “The Australian Government is pleased to be working closely with UN Women globally to support women and girls.”

The Australian National Committee for UN Women is coordinating the campaign in Australia. The campaign will include public events, community education and diverse media platforms to enable the community to reflect on and state their views about how far we’ve come towards achieving gender equality since 1995 – and how much remains to be done.