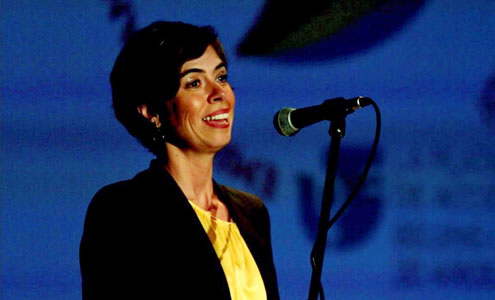 Through an event incorporating words, music and other artistic expression at the Teatro Arlequín de Casa Ensamble, the United Nations in kicked off the Beijing+20 campaign in Colombia. Recognizing the 20th anniversary of the Beijing Declaration and Platform for Action, the campaign launch was jointly hosted by UN Women, UNDP, UNHCR, UNICEF and UNFPA, and brought together 230 people, including members of the local and national government, civil society representatives and the international community in Colombia.

Speaking at the event and calling for the participation of the public in the Beijing+20 campaign, the Resident and Humanitarian Coordinator of the United Nations System in Colombia, Fabrizio Hochshild, said, “this campaign is a unique opportunity for collective reflection on the importance of advancing the full guarantee of women’s human rights, and to ensure their active participation in development and peacebuilding.”

Country Representative of UN Women in Colombia, Belen Sanz Luque, urged the participants for reflection and joint responsibility to bolster efforts towards promotion of women’s empowerment. “Therefore, in order to increase social mobilization, awareness and resume the public debate in all sectors of civil society, the United Nations system, [led by UN Women] would like to involve all stakeholders, including the general population to underline the relevance of the Beijing agenda and ensure that all can understand and adopt these commitments,” she said.

In Colombia, women still face multiple forms of discrimination, in education and economic participation, and while they have the right to join the military and other branches of the armed services, they are not yet permitted to serve in the combat arms units.

The event was marked by artistic and cultural highlights, and featured popular performing artists from the region who have also been part of the UN Secretary-General’s UNiTE campaign to end violence against women. Feminist rapper, Diana Avella, and pop singer Silvia Ochoa performed, as well as Uruguayan singer Malena Muyala, a recognized interpreter of tango and milonga. Video messages were weaved into the event and featured well-known Colombian leaders, each of them highlighting the 12 critical areas of concern focused upon in the Beijing Declaration and Platform for Action. They urged passionately for concrete and urgent action to further the commitments made at Beijing Conference in 1995.

Related News
06/05/2015
From Beijing to Post-2015
27/02/2015
“Take intense measures” to accelerate women’s full and equal participation in politics, leaders say in Chile
26/02/2015
During Brazil’s Carnival, parade-goers promote respect for women
21/11/2014
Latin America and the Caribbean reaffirm commitment to the Beijing Declaration and Platform for Action
27/06/2014
Once we make this dream a reality…
END_OF_DOCUMENT_TOKEN_TO_BE_REPLACED