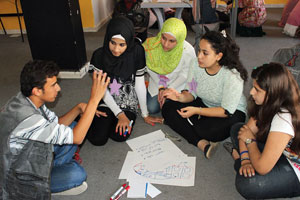 The Fourth World Conference on Women took place in Beijing in 1995. Why then would young people care about it, why should it matter today? That is the challenge UN Women in Jordan decided to take head on at an event recently. How can one explore the critical areas of concern under the Beijing Declaration and Platform for Action with young people in a way that is engaging and interactive? This was  part of the joint programme led by UN Women Realizing Beijing+20 in Jordan: Women in Action!, with WHO, UNFPA, UNESCO, UNICEF, UNDP and UNRWA as partners, the team decided to put together a number of initiatives to address key challenges and achievements in Jordan for gender equality.

A science workshop for young girls from the north of Jordan, known for its many universities, was the starting point for a UN Women and UNESCO event focused on the critical area of concern on education and training for women. The workshop was facilitated by the Scientific Culture Society. Over the course of three days, participants of ages 10-15 years had the opportunity to explore their own perceptions around education in new and innovative ways. This event was designed to challenge the girls to use objects from their daily lives to complete scientific experiments and achieve a team mission. As an awareness-raising opportunity for young girls to approach science in a fun and creative way, this event was also instrumental in collecting girls’ views, aspirations and ideas on how to advance the implementation of the Beijing Declaration and Platform for Action in Jordan in the field of science and education.

“I didn’t know how much I was capable of, until my teacher held my hands and helped me to discover my potential. I will never forget her and the impact she had on my life,” one of the students affirmed.

Participants voiced their concerns about the situation of girls living in remote villages, who are denied the opportunity to access education in schools and universities. They also stressed the importance of overcoming the cultural barriers and the social pressure which prevent women from pursuing a university career, due to fear of harassment or family pressure. In Jordan, equal rights are guaranteed in the Constitution, though gender discrimination is not specifically mentioned.

“Education is the foundation for everything because it prepares younger generations to look out to the world and see themselves as being part of the whole humanity and not just part of a closed society,” affirmed Mr. Hamza Arsbi, the Head of the Scientific Culture Society. 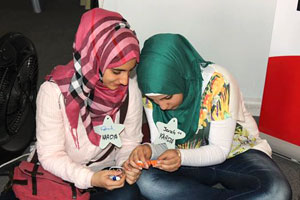 Young girls performing one of the exercises at the scientific workshop organized by UN Women, UNESCO and the Scientific Culture Society; Irbid. Photo: UN Women Jordan

The joint programme, commenced on 1 April 2014 and was followed by the official launch of the Beijing+20 campaign in Jordan with a video message from Her Royal Highness Princess Basma Bint Talal on 22 May 2014, the day the global campaign was kicked off.

Working alongside the Jordanian National Commission for Women to address key challenges and achievements for the country, and to advance the commitments made in the Beijing Declaration and Platform for Action, the programme has been innovative in exploring the various areas of concern.  A number of initiatives have been organized all over the country, such as joint consultations with UNDP, the government and civil society on issues such as the environment, renewable energy and water scarcity in light of the post-2015 development agenda as a follow up to the Millennium Development Goals. A national survey on women and health in ten governorates of Jordan is underway. Focus group discussions in regions of the country experiencing chronic poverty have also taken place with marginalized women to provide a voice to their unique struggles and to strategize about methods of resolution. Consultations with women’s groups on women and media, resulting in recommendations to both the government and the private sector on how to strengthen the voice of women in national media outlets have also been completed.