Scoring a goal for equality 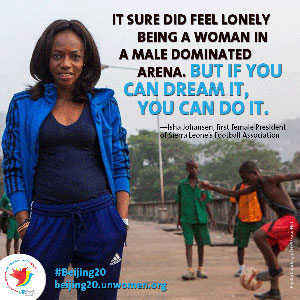 She is a household name, no matter who you ask in the war-ravaged West African nation of Sierra Leone.  Some people refer to her as a "brand," some as "the iron lady." Isha Johansen is the first female President of Sierra Leone’s Football Association and currently, the only female Football Association President in the world.  She is currently the only woman also to own a national football club. From her passion of the game, another of her leading projects, entitled FC Johansen, was born at the end of the country’s decade long civil war in 2002. This project aims to keep young boys in school through instilling in them a passion for football.

Starting with  her neighbourhood, and gradually extending her efforts and  influence, Isha nurtures orphaned and underprivileged boys to become not only local and international youth icons by playing for her football club, FC Johansen, but to spread the reputation of their country  Sierra Leone around the world. Some of these boys have been called up for trials in some of the world’s most famous and powerful football teams such as Chelsea, Manchester City and Liverpool. FC Johansen players have travelled the world over, playing tournaments and rubbing shoulders with football icons like Zidane, or more commonly known as “Zizou”, and David Beckham.

Of her pride in FC Johansen and the boys that make up the club, she says, “There is nothing more fulfilling than to nurture and watch something or someone grow to fruition. The club FC Johansen and the players grew from total obscurity to oblivion. It was truly a football ‘field of dreams.’

She is inspired by her father, who was a co-founder of a renowned football stakeholder with the legendary Sierra Leonean East End Lions, one of the oldest football clubs in her country’s history. She underlines that for women in unchartered territories, “Integrity is all a woman has. You cannot do it without integrity, sincerity, and commitment.”

Though things are moving swiftly now, she sometimes questioned herself in the beginning and whether she was in the right field. “It sure did feel lonely being a woman in a male dominated arena trying to steer the leadership in the direction of a new era for football in Sierra Leone. Most of the crew were bent on navigating towards another direction. But you know what? If you can dream it, you can do it and yes, dreams do come true.”

Today with a well-established reputation and firmly ensconced in prestigious global football events she says, “I have truly come a long way, and I have arrived. I am now not just a national champion, but an international player, and I intend to take Mama Salone [referring to her country] all the way to the top.”