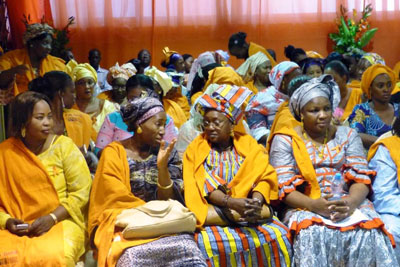 Participants at the event sharing ideas about girl's education Photo: UN Women
Bamako - “A development mechanism which ignores input from youth is like a car without gas, as it ignores one of its sources of energy,” said Fatouma Seid, the Representative of the Food and Agriculture Organization (FAO) in Mali at the public launch of the Beijing+20 campaign. In November, the international community in Mali built momentum towards the 20 year anniversary of the Beijing Conference by launching the campaign as a public event in the capital city of Bamako.

The public launch not only aimed to raise awareness about the accomplishments of the country in terms of gender parity, but also emphasized leadership and promoted education through an intergenerational dialogue focused on one of the critical areas of concern, the girl child.

Hosting the panel on girl’s experiences was Mariam Drame Diallo, a former Youth Parliamentarian and a civil society leader, Naba Traore, a famous singer, among others. Youth participants highlighted several barriers including challenges they face in being recognized as leaders in their own right because of their age, as well as accessing opportunities for meaningful employment. 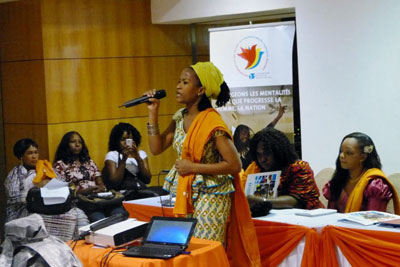 A woman speaks to the group about girl's economic opportunities Photo: UN Women
Though Mali has advanced in terms of women’s role in the economy, the struggle remains to incorporate both young women and men in the marketplace and further educational opportunities. The population of the country is young, with 23% being between 10 and 19 years of age. According to UNICEF figures from 2010, 75% of the female population between  the ages of 15-24 is illiterate, making access to education for women and girls one of the main priority areas of the national Beijing+20 campaign.

In response to these concerns, former Minister and the only woman to serve as Governor in Mali, Sy Kadiatou Sow, underlined strategies to challenge the status quo, and urged young women to be comfortable to advise their counterparts about gender-specific issues such as income disparity between women and men and working hours for women who are raising families. Women participants at the event highlighted the power of a good education, and support from strong male family members, as integral to their road to success.

Ms. Seid of FAO emphasized to the young women that, “you have a social responsibility with regards to humanity, to Mali, to Africa.  As young women, you may be faced with more challenges than young men, but you must embrace those challenges. Believe in yourself.”

The event closed with as prizes of excellence were presented to the nine highest-ranking school girls in the region for their extraordinary achievements in academia.