Creating new pathways, in the skies and on the ground 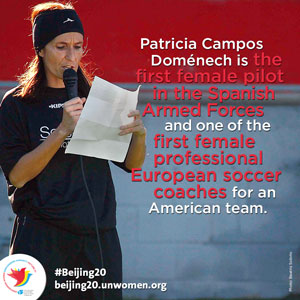 Growing up in Onda in Castellón, a sleepy eastern town in Spain known for its sweeping landscapes, she always had a keen awareness that her interests were not the same as other girls in her neighborhood. Patricia Campos Doménech relished every opportunity to learn about planes, helicopters and the aerodynamics of flight, watching aircrafts fly overhead during long afternoons outside spent dreaming about her future. She also played soccer like many children, but wanted to take the lead in the soccer games, coaching other players to improve the competition and make the games more exciting. Rejecting the idea of sitting on the sidelines when the girls turned to other activities, she played soccer with the boys.

As a young woman, she was forced to think about her future and to make a decision about which career path to follow. Though there was a professional soccer league for women in Spain, she found that women earned roughly half of what the men in similar positions took home at the end of every month. Campos Doménech chose to pave the way for women in the military instead, training often for 20 hours per day, to become the first female pilot in the Spanish Armed Forces, and found her place in the Navy.

After flying with the Navy for eight years, she decided that it was finally time to return to the world of soccer, missing the competitive spirit of the game and wanting to take on a new challenge. In May 2013, she became one of the first female professional European soccer coaches to coach an American team, Carlsbad United F.C.

Ever the passionate speaker, she enjoys coaching the young women, preparing them to play at the university level and eventually, professionally. She recently took her skills to the next level, and onto another challenge. She moved to Uganda to coach for Soccer without Borders, a non-profit that specializes in coaching the younger generation in developing countries.

My mother told me that YES, you can do it, you can do anything. Many people said I couldn’t. My mom and my brothers have been the biggest influences I have had in getting to where I am today. I have great friends too who encourage me to keep going after things I want to do.

What were some of the biggest obstacles you faced in becoming the first female pilot in the Navy?

When I started, they [the Spanish Armed Forces] didn’t have any women flying planes. I was a VIP pilot, I flew the Royal family, military people, and people would be shocked to see me in the cockpit! I received a lot of chauvinist comments, but I didn’t give them importance. I focused on my job and tried to be as professional as I could.

Has being a woman affected your road to where you are today, especially in your life as a coach?

If I had to be born again, I would be born as a woman because I like to fight to win. For things that I believe in. For things that we, as women, deserve. But it is unfair that women sometimes don’t have the same opportunities men have. We are all human beings. We have to have the same opportunities and the same rights. Society tells us we can’t do the same things. But we know we can and we have to push for this.

I think when a woman opens a door, you open it for all other women. We are here. We are soccer coaches, pilots, engineers. I want to open the door for other women.

Even though they will have a lot of obstacles, they have to struggle to get what they want. Just because something is hard, it doesn’t mean it is not your right. For girls, people may tell them they are supposed to be home with children. People will tell you that you can’t do it, whatever it is you want to do with your life. But you have to know yourself. You have capacity to study and get any degree you want. Society can’t tell you what you have to do, only you know what you have to do.