The Mangueira traditional samba school joined UN Women’s Beijing+20 campaign "Empowering Women - Empowering Humanity: Picture It!" with a tribute to women framed in an explosion of colour and audacity at this year’s street parade in Brazil. 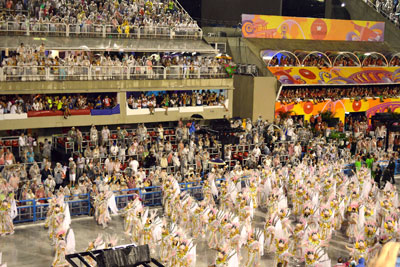 Ala Dalva de Oliveira was one of the many groups of presenters within the Mangueira samba school, which competed at the Sambódromo stadium on 15 February. Photo: UN Women/Giselle Netto

Sweat pouring, nearly 4,000 parade-goers, many decked in gold sequins and gigantic white wings, dance and drum down Rio de Janeiro’s landmark Sambódromo stadium on 15 February, where the country’s top samba schools compete as part of a week of celebrations and street parties attended by over 1 million people each year.

Using an explosion of colour and audacious costumes to tell the story of brave women everywhere, the traditional samba school of Mangueira paid tribute to the women who fight every day to overcome gender inequalities in their parade. It is one of several national events for UN Women’s global Beijing+20 "Empowering Women - Empowering Humanity: Picture It!" campaign. 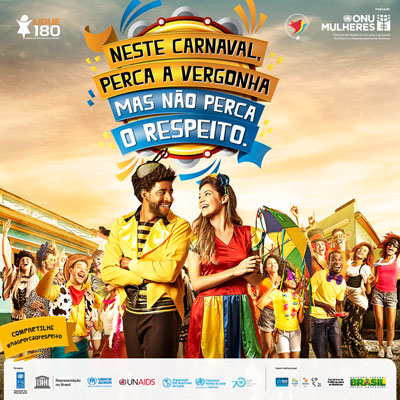 Donning the slogan “During this carnival lose your inhibitions, but don't lose respect”, and promoting the number for a women’s help-line “Ligue 180”, a series of colourful ads were designed to raise awareness of the need to respect women and denounce violence. Creative design: Propeg Comunicação SA

In addition to the alliance with Mangueira, as part of the Beijing+20 campaign during carnival, UN Women spearheaded the slogan “During carnival lose your inhibitions, but don't lose respect” a refrain printed on hand-held fans and poster frames used during Carnival street festivities, also by the Carmelitas and Mulheres Rodadas (“turning women”) feminist activist groups during their parades in Rio de Janeiro on 17 and 18 February.

The poster campaign, coordinated by UN Women, is being run in conjunction with United Nations system agencies UNDP, UNESCO, UNHCR, UNAIDS and PAHO/WHO, with institutional support from the National Secretaria de Políticas para as Mujeres de Brasil and the government of the City of Rio de Janeiro. The posters and materials are a pro bono creation of Propeg Comunicação SA and the campaign is reaching 16 of the country's major cities through a range of media. They are being featured prominently on Instagram’s mission platform for social good and highlighted in a 15-second video version on YouTube (in Portuguese).

“Mangueira prepared really well and has paid tribute to the women of its community and of Brazil, recognizing their struggles for equality. In Mangueira, as in the whole country, women are seeking a level playing field, are becoming empowered and, in this way, are transforming their realities, their families' realities and their communities' realities," said Nadine Gasman, UN Women Representative for Brazil. 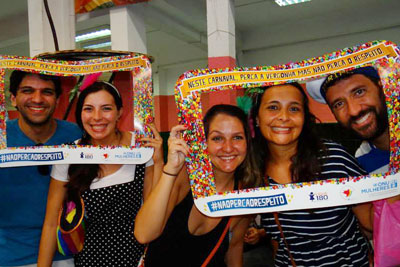 Young carnival-goers pose with poster frames for the UN Brazil campaign at a rehearsal of the Mangueira samba school. Photo: UN Women/Isabel Clavelin

She attended the 15 February parade in the Marquês de Sapucaí parade area, home of the samba schools championship, along with Joaquin Molina, PAHO/WHO Representative for Brazil, and Ana Rocha, the Women's Secretary for Rio de Janeiro.

The samba school declared 2015 as the Year of the Women of Mangueira and joined forces with UN Women Brazil. As part of the new alliance, a series of workshops will take place on gender equality and women’s empowerment, aimed at female and male participants in social and sporting events. They will be held at the samba school, but are open to all members of the community around Mangueira, a Rio favela.

World Cup Fans to be greeted with new app: ending violence against women is the goal

Innovative campaign tackles soccer and violence against women in Brazil

Related News
27/02/2015
“Take intense measures” to accelerate women’s full and equal participation in politics, leaders say in Chile
06/05/2015
From Beijing to Post-2015
21/11/2014
Latin America and the Caribbean reaffirm commitment to the Beijing Declaration and Platform for Action
05/09/2014
In Colombia, stars unite to launch Beijing+20 campaign
24/07/2014
The fearless seafarer
END_OF_DOCUMENT_TOKEN_TO_BE_REPLACED