Cairo – At the Arab States high-level regional review meeting for Beijing+20, held in Cairo, Egypt from 2–3 February 2015, Member States assessed progress and challenges in implementing the 20-year-old Beijing Declaration and Platform for Action and agreed to actively ensure justice and equality for women in the Middle East.

The meeting, organized by the League of Arab States, the UN Economic and Social Commission for Western Asia (ESCWA) and UN Women, was the most comprehensive review of the Beijing Platform for Action in the Arab States to date, with a record 21 countries submitting national reports. 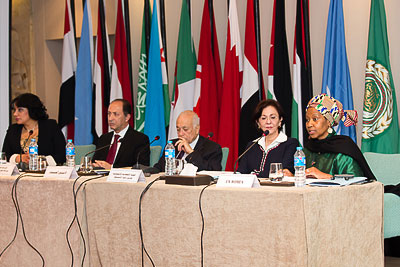 The opening of the meeting was attended by Nabil Elaraby, Secretary General of the League of Arab States, ESCWA Executive Secretary Rima Khalaf and UN Women Executive Director Phumzile Mlambo-Ngcuka.

Addressing more than 100 participants from Member States, civil society, and international organizations in her speech Ms. Mlambo-Ngucka said: “We count on your leadership to tackle the barriers that remain for Arab women, and to show the global community that no challenge is insurmountable with the right political will, leadership and social mobilization.”

Both Mr. Elaraby and Ms. Khalaf reminded the audience of the difficult challenges the region is facing, in particular for women living in conflict. Mr. Elaraby emphasized the plight of women in Syria, who have suffered tremendously over the past four years of instability.

“Despite that painful reality, I am confident we can continue the work we started for Arab women´s empowerment. It has been proven that where there is a will, science and knowledge, a lot can be achieved for our countries and our citizens,” said Mr. Elaraby.

Ms. Khalaf highlighted that violence is one of the biggest challenges to women´s rights in the region, calling it “a bitter reality” that “condemns communities and … hinders development.” She said despite progress being made in education, unemployment remains high and political participation among the lowest in the world.

The two days of discussions were fruitful, recognizing the achievements made in the region over the past 20 years, including ratifying international treaties, putting in place more gender-sensitive laws and policies and increasing levels of education for girls.

However, Ms. Mlambo-Ngucka stressed that “the lack of balance in the law-makers has resulted in unbalanced laws. Discrimination in the law persists in many countries, particularly in the area of family law. This includes tolerance of harmful practices to women and girls.”

The participants discussed the effects of conflict on women, particularly in areas of violence against women, harmful media practices which perpetuate negative stereotypes, and the socioeconomic status of women.

The outcome document, “Arab Declaration for justice and equality for women in the Middle East,” cemented States’ commitment to Security Council resolutions 1325, 1820 and others, the International Conference on Population and Development, the post-2015 agenda and Sustainable Development Goals, and the Cairo Declaration of 2014.

The outcome document recognizes the specific risks to women in the region as a result of armed conflict and terrorism, their dire humanitarian needs, and the large number of refugees and internally displaced persons in the region, and the challenges these factors pose towards achieving equality.

It also renews Member States’ commitment to accelerate implementation of the Beijing Platform for Action and voices their commitment to international treaties, including the Convention on the Elimination of All Forms of Discrimination against Women and related protocols. States also promise to ensure gender equality and women’s empowerment in national plans, policies and budgets, as well as to include indicators to measure progress.

The fact that a record 21 of the 22 Arab States submitted their national Beijing+20 reviews is a sign of strong will, which was reinforced by their commitments to escalate efforts to achieve gender equality and women’s empowerment in the region.

“So much can happen in a decade and in a generation. You are, we are, the generation to make that change happen,” Ms. Mlambo-Ngucka reminded the audience.

The next step towards such change will be at the 59th Commission on the Status of Women in New York in March, where the Arab States and other regions will present the outcomes of their respective regional review meetings and how to ensure global strides for the future.

The Outcome document will be available shortly on the ESCWA website. Read more about other regional review meetings here. Find outcome documents of all regional-level Beijing+20 reviews here, and national-level reports here.

Related News
02/02/2015
UN Women Executive Director speaks at the last of the Beijing+20 regional reviews, in Cairo
20/05/2014
She gets a kick out of helping people
14/05/2014
Towards Beijing+20: The time is now
09/06/2015
Press release: UN Women Beijing+20 event in Berlin urges accelerated progress on gender equality and women’s rights
01/06/2015
Women’s health in the spotlight at the World Health Assembly
END_OF_DOCUMENT_TOKEN_TO_BE_REPLACED