Leading the way for women and girls with disabilities 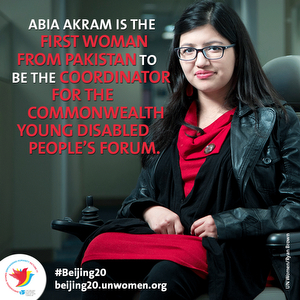 She is often called the shining hope for people with disabilities.  Abia Akram, age 30, is an educated woman, and proud of the two Master’s degrees she holds. She personifies the cause she champions: that education can be the catalyst in a world where those with disabilities are not always taken seriously. The first female with disabilities from Pakistan to win the much sought after U.K. Government’s Chevening scholarship, Akram has continued to push for change, altering antiquated notions of disability. She is the first woman from Pakistan, and the first woman with disabilities to be nominated as the Coordinator for Commonwealth Young Disabled People’s Forum and is also the chair of the Youth Council of UNICEF. Adding to her list of accolades, she is the co-chair of Asia Pacific Women with Disabilities United, and focuses much of her time on education and training for women with disabilities to improve self-confidence, and lead others into the future.

How did she make all of this possible at such a young age?  Akram says that education and her parents’ support from the time she was a child gave her the confidence to go out into the world and accomplish more than most thought was possible. Aware of her surroundings at a young age, she knew many girls in Pakistan were not allowed to go to school due to it being expensive. Many poor families opted to send their boys to school instead for their income potential. For a person with disabilities, especially a girl with disabilities, the idea of being sent to school was far from the norm.

Going against the grain, Akram’s parents valued her as much as they did their other children, sending her to school and pushing her to make her own decisions. At age seven, she asked her parents if she could live with an uncle so that she could attend a specific school that would allow her to have a mainstream education, and was also somewhat accessible to her wheelchair. Her efforts paid off, and she graduated with the highest honors, and pressed ahead to earn two Master’s degrees.

Passionate about the urgent need to promote training and leadership of women and girls with disabilities, Akram decided to follow this path of activism. Leaning on her family for moral support, she started the National Forum of Women with Disabilities in Pakistan to educate women with disabilities on how to lead claim their rights. Living in a country where she says most people believe that having a disability is either a curse from God, or a mythically omnipotent force, staking out space for women with disabilities in the public sphere is a path others have feared to tread.

My education and my parents helped and supported me. The research work I did in different countries, in Japan and the U.K. taught me a lot.

My education also helped me in getting connected with the disability movement on the global and national level. Before that, I felt like I was the only person who had this kind of disability. Once I got connected, I realized how much I had to contribute and to learn. I wanted to bring visibility to women with disabilities campaign.

My organization works to connect women with disabilities to education and training on leadership, and this continues to be a challenge. When I try to contact women with disabilities in many countries, it is so difficult. If I identify them, their parents won’t allow me to go and meet with them. If a woman with a disability comes to see them, it can help them to accept their disability so that they can move forward as leaders, as professionals, as people. We are working on empowerment through training sessions, education, conferences and work in the field. All of this is so important to teaching women with disabilities leadership qualities. Building capacities of organizations to change their policies and mindsets, giving them training sessions to understand how to include those with disabilities is a challenge worth working for.

How has being a woman affected your path to where you are today?

For women with disabilities, don’t underestimate yourselves. Feel your disability as your strength. Educate yourself about your rights, and if your country doesn’t uphold your rights, fight for them.