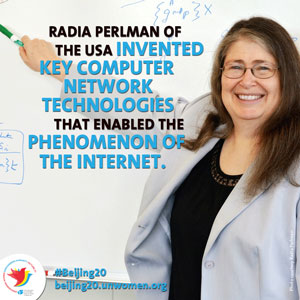 Raised by engineers, Radia Perlman loved puzzles and problem solving from a young age. A high-level math and science student, she credits her parents for their encouragement and support. Going on to study mathematics at the prestigious Massachusetts Institute of Technology (MIT) in the United States of America, she was one of very few women at the university, with even fewer women in the Mathematics Department. After her first year of studies, she rarely saw women in either her dormitory or in her classes.

After completing her Master’s degree and all course work for her Ph.D. except for the dissertation, she took up a friend’s offer to join a company that received contracts from the government to design technology solutions. When she solved an important network protocol problem, she was noticed by Digital Equipment Corporation, an early leader in large scale computer networks.  She went on to do ground breaking innovations which transformed computer networks from small, fragile communities into large, reliable, self-organizing networks. The Internet adopted many of these designs.

Tell me about the spanning tree protocol, your most famous discovery that led to the birth of the Internet.

I did so many other things besides this! Designing the spanning tree algorithm was only about one week of work for me, but it is what everyone remembers. I spent more time writing a poem about the algorithm than I did designing it. But anyway, the spanning tree algorithm changed Ethernet from being something that could connect a few hundred computers inside a single building, into something that could support networks of hundreds of thousands of computers.

What were some of the biggest obstacles you faced in reaching your goals?

I feel like I’ve lived a privileged life and have not had nearly as many obstacles as other people.
An important obstacle was my own insecurity.  Most people are insecure, but people don’t admit this, so I’m hoping that by sharing this, it will reassure other people.  My perception the first time I was in graduate school was that everyone else was “smart,” and I’d just gotten into graduate school because I “studied hard”.  I couldn’t imagine “doing original research”.  I wound up dropping out, after completing all requirements but a thesis.  Dropping out of grad school turned out to be very fortunate, though, because it was much easier to become an expert by working in the field than by trying to learn it from classes.

After I had my first child and I went back to school to get my Ph. D. in computer science, I thought everyone would stare at me and wonder what this old lady was doing in their class. After all of my work had been published, I was well enough known that the rest of the faculty treated me as a colleague, a pioneer in the field, instead of the only woman in the class.

What would you say to a young person thinking about going into technology?

A lot of success requires self-confidence. Somehow, you have to keep reassuring yourself that you can do it, and that it is ok to ask for help. Hopefully, you will find colleagues that will delight in helping, and you should do the same for others.

Technology is a great profession.  There is the misconception that engineers are the type of people that took things apart, or built computers out of spare parts when they were young. I never did that. And in fact, the best team consists of people with different types of skills.

This field can be the basis of accomplishing anything you want.  If you are artistic, if you are good at communicating, if you care about doing something socially relevant, there are plenty of opportunities for people with these skills and passions in parts of the world.

Related News
04/05/2015
Edith Lederer - Legendary journalist, breaking boundaries in the newsroom and beyond
04/05/2015
The time is now for media to make the future – on-screen and off-screen
01/04/2015
Women’s Health is Everyone’s Health
14/05/2014
When I think of Beijing+20, I know that my grandmother would be proud
13/05/2014
“Before Beijing, no one really talked about the differences between being a girl and being a woman”
END_OF_DOCUMENT_TOKEN_TO_BE_REPLACED