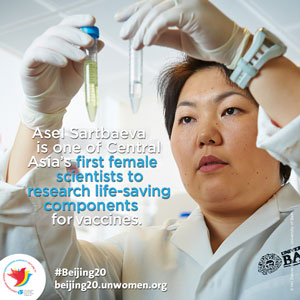 As she mixes several chemical compounds in a test tube, she meticulously takes notes to make sure she is tracking each stage of the experiment. At this early stage in her research on silica nano-coating, each trial counts.

At the age of 36, Asel Sartbaeva, one of the first internationally recognized female scientists from Central Asia, focuses on creating a way for vaccines to be transported without the expensive and challenging aspects of keeping them at lower temperatures. Her ground-breaking research if successful could potentially save millions of lives around the world, and drop the prices of vaccinations to make them more widely available in developing countries. Short listed for the illustrious L’OREAL-UNESCO Women in Science Fellowship for her work, she has also drawn public attention as one of the 175 Faces of Chemistry by the Royal Society of Chemistry in the UK.

Born in the former Soviet Union in what is today known as Kyrgyzstan, her parents were passionate about social sciences and art. She demonstrated her interest in the sciences early, she says joking that this was an act of adolescent rebellion. But more seriously she adds that her science teachers in high school sparked her love for science. Graduating as the only Kyrgyz female student in natural sciences study from Kyrgyz-Russian Slavic University, she resolved to pursue an academic career. She spent six years looking for a scholarship abroad to finish her studies. Finally, her persistence paid off and she was awarded a scholarship at the University of Cambridge in the UK.

Successfully navigating the male dominated fields of chemistry and physics, she is now a Royal Research Fellow at the University of Bath in the UK. The mother of a little girl, she has now resided outside of her home country for 14 years, but knows that she does so for a greater good. She says many positions in her home country focus more on teaching, and she prefers to continue her research to better serve those who may not be able to afford vaccines in today’s marketplace. Here, she talks about the challenges in being one of the few women scientists not only in Kyrgyzstan, but globally as well.

What do you think have been the most important factors that have helped in getting where you are today?

Tenacity and luck. As someone famous once said: “The more I work, the luckier I get”. That’s the kind of luck I am talking about here. When I was looking for a scholarship to finish my studies and get my Ph.D., every time I was told “NO,” despite being upset, I thought of my dream of being a scientist and that kept me going.

Tell us a bit about your childhood, your ambitions and who inspired you to be who you are today?

My mom is my biggest inspiration. She inspired and helped many women. She brought up my brother and me during really hard times, after the breakup of the Soviet Union. When I was a child, I was quite head strong; some even would say I was obstinate. I knew from early on that I wanted a career in science, but I also knew that I could succeed in anything.

Has being a woman affected the road to where you are today, and how?

I know that it should not have affected my career, but I think it did. Interestingly, it is not all negative. Of course, I had to take maternity leave and was out of the job for six months, and it took me a while to catch up again. I couldn’t travel for almost three years after my maternity leave, which was a big disadvantage.  Once you take maternity leave, people stop inviting you to give talks or to present at conferences, and it is not easy to leave the family to travel to conferences or workshops around the world.  These are obvious setbacks. Apart from that, there are much more subtle disadvantages – I find sometimes that I have to really make a point in speaking up so that senior male colleagues pay attention.

There are advantages to being a woman in science too. People generally remember me from conferences, especially if I am the only female speaker. After I had my daughter, I had new ideas for my research, so this was very enlightening. I am probably more productive now, as my working days are shorter. I cannot stay in the laboratory for long hours, as I used to before I had my daughter.

What do you believe is your greatest contribution, to society?

I make good tea, - just kidding. I’d like to think that generating knowledge is a good contribution. Training a new generation of scientists would be another one. Giving birth to a healthy and a happy little girl is a big one, I think.

If they want to succeed in science, they need to believe in themselves and not let anybody else dictate their goals and aspirations. A career in science is not always easy. Nothing beats hard work. The more hard working young people are, the more successful they will be.

Related News
27/10/2015
Creating new pathways, in the skies and on the ground
28/05/2015
Charting new territory on the minefields
18/05/2015
Galvanizing multimedia for multiple causes
01/04/2015
Creating history, building a rights culture
02/02/2015
Leading the way for women and girls with disabilities
END_OF_DOCUMENT_TOKEN_TO_BE_REPLACED