“You aren’t defined by anyone else’s limitations on you” 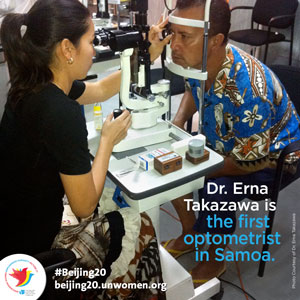 Dr. Erna Takazawa says she always knew she wanted a job in the medical profession, but it was her sister’s vision problems that made her choose optometry as her specialty. Her sister’s first pair of glasses cost the family an equivalent of a month’s groceries at the time. Dr. Takazawa explains that even just five years ago, the only way for Samoans to obtain eye glasses to enable clear vision was to send their prescriptions to their family members in Australia or New Zealand, who would then get them made, a process that could take months. Some found that by the time they received their glasses back from relatives overseas, their vision had already worsened.

The 26-year-old is now Samoa’s first and only optometrist and practices at the Optometry Unit in the National Hospital Service. Her practice not only makes eye health more affordable and feasible for adults, but it changes the lives of many on a daily basis through the early detection of eye problems and finding solutions. She also works for an NGO in partnership with the National Health Service to screen children with disabilities, and does periodic eye screenings in Savai’i, the other main island of Samoa.

Known on the Samoan islands as a trailblazer, Dr. Takazawa was named one of the first ever Queen’s Young Leader Award winners, a top honour received by just nine others across the Pacific region. This award recognizes those between the ages of 18 to 29 who take the lead in their communities to transform lives. Dr. Takazawa will be flown to the United Kingdom to receive the award from the Queen herself and is scheduled to attend a leadership training and series of networking events. However, she states that this award is most meaningful to her because it is accompanied by the chance to win a grant to help the NGO she partners with regularly.

Here, she tells us about what inspires her.

What have you achieved that you are most proud of?

I love helping people and have become very passionate about working with children who have disabilities. With every person, I aim to ensure that they get the best possible vision, which in turn helps improve their everyday lives and also contributes to the community’s well-being.

As one of the vision trainers with the NGO Senese and the Ministry of Education, I help train teachers in primary and secondary schools around Upolou Island [in Samoa] to detect eye problems in their students. The programme has met with great success and I am proud to be a part of it.
I am also the Clinical Director for Special Olympics Samoa’s Opening Eyes Programme. In 2013, we carried out a vision screening in partnership with the U.S. Navy on both Islands of Samoa. We helped around 200 athletes with intellectual and physical disabilities.

What are some of the most important factors that have helped you reach where you are today?

According to the World Health Organization (WHO) 80 per cent of visual impairment including blindness is avoidable. This means that the majority of people do not necessarily have to suffer from visual problems or blindness. WHO also states that 90 per cent of visually impaired people live in developing countries. My ultimate goal coincides closely with WHO’s Vision 2020 campaign – ending avoidable blindness by the year 2020.

Being named one of the Queen’s Young Leaders hopefully gives me a chance to draw attention to this issue and potentially gain more assistance and partnerships in this area. Education and awareness raising campaigns are vital to changing mindsets about maintaining the health of your eyes.

What have been some of the biggest obstacles in achieving your goals?

Eye care in Samoa has come a long way in the past three years. We now have a local ophthalmologist, myself as the optometrist and nine eye nurses. It’s been challenging with the lack of resources, lack of funding and lack of skilled workers in Samoa. The situation is improving, but it takes constant work. On a nationwide level, it’s hard to be the only one who does what you do.

What message would you give to young people?

Start with the mindset that you aren’t defined by anyone else’s limitations on you. We’ve all heard this kind of thing before: “you can’t be Prime Minister,” or “you can’t be a doctor,” because you’re poor or female or you have a disability. But don’t be afraid to stand out, to do something different and be daring. Be leaders in your community. Find your passion and purpose and take action.