Pioneering the way for women in defense and security 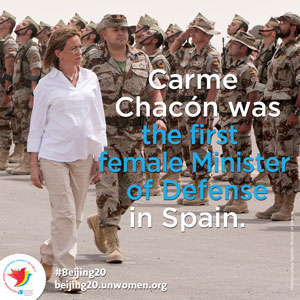 Raised in Barcelona, Carme Chacón knew that she wanted to work in government. When she was 16 years old, as soon as the law permitted a formal declaration of political alignment, she joined her political party and made her voice heard in local government.  Born into a politically active family, she credits them with inspiring her to work in governmental institutions to make the world a more equitable place. Her grandfather was a war veteran and had been placed in a concentration camp, which paled in comparison to his time spent in prison as a political protester. A fervent advocate of democracy, he taught her to strive for her freedom, and to never give up on claiming rights for herself and others. Believing in government institutions and their ability to change culture, she forges the way ahead for women, and teaches her young son to value women as equal partners in the advancement of humanity.

The first female Minister of Defense in Spain, she began her career as a law lecturer, and relished the idea of influencing other young people the way her grandfather had motivated her. She knew that she could increase her impact on her country by entering local politics, and was elected the vice-mayor of Esplugues de Llobregat in Barcelona at the age of 27. She became a parliamentarian, and then went on to be the Vice-President of Congress, the Minister of Housing, and was appointed to be the first female Minister of Defense of Spain.

Quickly taking control of her position in 2008, she made global news not only as the first female Minister of Defense, but also by engaging with the media to show the positive work done by the Armed Forces abroad near the end of her pregnancy. An advocate for women’s rights, she is proud of the ground-breaking law passed throughout her time in government, the Organic Law for Equality between Women and Men, mandating that discrimination not be tolerated in the workplace, in education and in other institutions such as the Armed Forces. Playing the role of the advocate in her political party meetings, she used her skills in persuasion to endorse this legislation, and takes pride in upholding its statutes as well.

She is now the Secretary of International Relations of her political party and aims to start a school of good governance at the Miami-Dade College in collaboration with a Spanish foundation. Dedicated to all that she does, she spends a week per month in the United States, and lives between Madrid and Barcelona, dividing her time between her family and her professional commitments.

The sensation of guilt that moms have when they are working is intense. It is like carrying a big bag around. We would like to spend time with our children, and me with my son, of course. This is a part of our culture. Many journalists asked me how I managed being a Minister and a mother, but no one asks these questions of men.

I went to Afghanistan nearly 20 times. We had missions all over the world, in Chad, in Afghanistan, Lebanon and many others. I always went there when there was a human tragedy. The male Minister of Defense never got those woman specific questions.

I like the laws we passed to promote equality in the Armed Forces. It is so much more difficult for a woman soldier than a man soldier. We tried to help with rules to end sexual discrimination, harassment and others [as part of the Organic Law for Equality between Women and Men]. As you can imagine, I felt very close to these improvements.

What is your main message for younger women and girls?

You can be a good professional. You can be a good mother. Fill yourself with your dreams and your goals. Of course you can. Don’t avoid being a mother if you want to be. At the end of the day, you can do it. The best you can give to the others around you is to be fulfilled with your dreams and your goals. It means sacrificing things, like sleep, but it is worth it. I would also tell them not to forget that it is easier for us [to achieve our goals] than it was for our mothers and grandmothers.