Charting a new path for women in medicine and health care 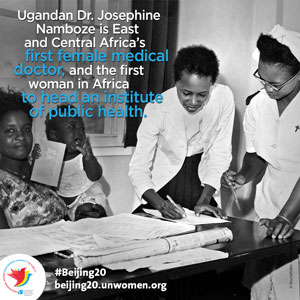 As a young girl in a suburb of Kampala, Uganda, Josphine Namboze pondered about all things science-related. She grew up in a farming village in a country where girls were often viewed as a means to fetch a good bride price for marriage to wealthier men. Though her particular village was progressive, health care for women in other areas was seen as an afterthought.

Namboze’s parents were educated, artistic and very modern: they sent their daughter to boarding school for years to get the best education possible. Enrolling in medical school as the only woman, she learned to work harder than her male counterparts to succeed. She ended up choosing to specialize in maternal and child health to tackle one of the biggest problems in the East and Central African region, maternal mortality, and went on to become the first woman to head an institute of public health at Makerere University Medical School.

Soon after taking the medical world by storm, she began teaching, and is renowned today as the first woman professor of medicine in East Africa. She later went on become the Director of Support for Health Services Development at the World Health Organization’s (WHO) regional office in the Republic of the Congo in Brazzaville where she managed health initiatives for 46 countries in the region, and was also the first Representative of the WHO in Botswana. Namboze is currently a board member of a number of NGOs and hospitals, and chairperson of the National Certification Committee for Polio Eradication Initiative in Uganda. She has been credited by numerous medical bodies for her thorough investigation into disease, which surmised that often reasons for various diseases were mostly due to lack of economic means and poor environmental conditions. Namboze vocally pointed out that race was not a determinant of disease at a time when such school of thinking was uncommon.

A mother of four, she balanced a ground-breaking career with her role at home. Here, she talks about her journey through colonial and post-colonial Africa as East and Central Africa’s first woman doctor.

My father used to take me to a hospital when I would get sick. One of the doctors at that hospital lived close by, and his children used to play with my brothers. We got to know them very well, and this inspired me to study medicine. There were also some expatriate women doctors at that hospital, and that showed me that being a woman and being a doctor was possible.

The cultural attitude was the biggest obstacle. Many said a woman could not finish the long course required to be a doctor. One had to be really bright to do this. People actually thought at this time that women could not be as bright as men! The duration of education that one had to acquire before being a doctor, people thought a woman could not be patient enough to do it all before wanting to get married. My parents were so supportive, and believed in equal opportunity for boys and girls. My parents helped me find a way to go to the boys’ school so that I could study practical sciences and attend medical school. I think my parents’ support was vital. If they didn’t support me, there was no way I could have achieved my objective.

Once I ventured into medicine, I felt that I had an obligation to succeed to be a role model to women so that they were not discouraged from taking up professions that were exclusively held by men. When I was doing obstetrics, I noticed that women preferred to go to a woman doctor than a man doctor. Even when I would finish a long day at work, there were still women waiting to see a woman doctor. Some of this might have been out of curiosity to make sure that I really existed!

First of all, by deciding to take up medicine, I helped to change the attitude about girls’ education and health care for women. A lot of girls and women now aspire to higher administrative positions in medicine also, which until this time were reserved for men. I encouraged women to feel that they had the same education as men and could now qualify for various positions. I made a big contribution in human resource development of medical professionals in Africa, and as a teacher, I taught for 20 or 25 years. This is a big contribution.

People should take the opportunity to work together, women and men. The world has changed so much. We can no longer afford to have women staying at home. We have to live in a more balanced society rather than having only men, when society consists of both women and men. Girls should share with their parents their aspirations so that they can receive encouragement and support just as I did.

It is very important profession, being a health care provider. I think women are quite well equipped for that, as we usually are the first health help people get at home. Women should be encouraged to go into health care in whatever capacity they want.