In the midst of war, a women’s rights warrior 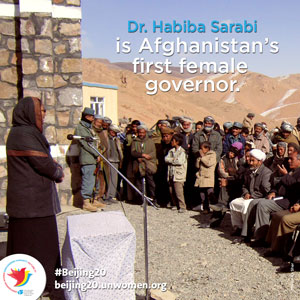 Born in the mid-50s in Mazar-i-Sharif, a cultural and religious site in Afghanistan with famous shrines that get thousands of visitors annually, Dr. Habiba Sarabi’s childhood was similar to that of many girls in her country. Yet, her life today is far from the ordinary. Dr. Sarabi says she grew up in a lower middle class household where money was tight, and her father preferred her brothers. She had to work twice as hard to show that she was capable of doing as much as them, if not more.  However, she received positive support from her relatives, who encouraged her to continue her studies. Her hard work paid off, leading her to study medicine in the capital city of Kabul.  With a fellowship from the World Health Organization, she moved to India to complete her studies in hematology.

In Afghanistan, a country steeped in tradition and years of conflict, Dr. Sarabi went on to become the country’s first female provincial governor, appointed by then President Hamid Karzai in 2005. She governed Bamyan Province and used this platform to promote the rich cultural heritage of the province. Time Magazine recognized her as a hero of the environment for her work in establishing the Band-e Amir National Park of Afghanistan in Bamyan.

Her success comes in spite of the personal instability and insecurity she faced in her war-torn country. Like many, she was forced to flee to Pakistan in 1996 during the Taliban regime, taking her children with her, leaving her husband behind with the rest of his family. In Pakistan, she turned her passion into a job and that began her long tryst with women’s rights. A fervent advocate for girls’ education, she started secretly teaching in refugee camps. Soon after she was selected to be the General Manager of the Institute of Learning in Karachi, and also the Vice-President of Humanitarian Assistance for the Women and Children of Afghanistan, a civil society organization.

On returning home, she took advantage of the opportunities of a new quota system to increase women’s political representation, and was appointed  to serve not only as the first woman Governor of a province, but also as the Minister of Women’s Affairs and the Minister of Culture and Education, positions in which she continued her advocacy for women’s rights. Today, she is the Advisor on Women’s Affairs and Youth to the Chief Executive Officer. Though she works long hours, and it is never easy, she says she owes her success in part to the fact that she has always had the support of her husband, whose own progressive views influence their three children, two sons and a daughter.

While I was still in education, poverty was the biggest obstacle preventing me from receiving my higher education. Similarly, lack of institutions that offered advanced degrees (Master’s or above) was another major obstacle for me in achieving my professional goals. Additionally, lack of interest and motivation from my family, in particular from my father, were some of the other factors that prevented me from reaching my professional goals. During the ‘70s and ‘80s, when I was a student, our peoples’ perceptions were not that enlightened to encourage their daughters to pursue their higher studies.

Today, although we are in a democratic decade, people still largely differ in terms of their opinion about my work. Fortunately, the majority of people praise and commend me for my work, while there are still some people who, in order to undermine it, overlook all that I have done and instead utter baseless statements such as women should have nothing to do with politics, etc.  They prefer women to always be busy doing the housework.

Tell us a bit about your childhood, your ambitions and who inspired or influenced you to be who you are today.

I was born in a middle class family that was considered relatively liberal at that time; a broader look at our family tree shows that my ancestors come from a very liberal family. Describing my smaller immediate family that was comprised of my father, mother, and brothers, I would say that my father was a very aggressive man who was biased against women. When people delivered the news of my birth to my father, congratulating him about it, my dad seemed to have a sorrowful face, and he didn’t even bother to look at my face, only because I was a girl.

My mother had great interest in my education. She said that if our daughter goes to school, she would at least become literate. Unable to read herself, she asked me to read her the letters that she occasionally received from her brothers.

My father also committed acts of violence against my mother, who was his second wife. She continued suffering from violence until she passed away. The violence committed against her impacted my life too. However, I was very much influenced from the life of my mother, who I believe turned me into a fighter and a women’s rights activist.

Has being a woman affected your road to where you are today?

Yes, it definitely has, since women’s participation has been very low in the Afghan government. During the years of war, a lot of Afghan talents escaped the country. The number of talented women, which was already low, was substantially reduced as a result of this talent vacuum. The number of educated and experienced women immediately after 2001 was very low in the country. Being a woman, and coming from a minority group were the two factors that helped me snatch the opportunity that was created and get into the reserved seat in the cabinet as per the quota.

How do you cope with being a woman in your area of work?

Afghan societies are very traditional, hence I respect and leverage those elements of Afghan tradition that don’t deprive women of their rights and don’t affect them negatively. The other point that is noteworthy is the fact that I mostly respect people and their different cultural norms and I try to back my efforts with those traditions of our societies that are favorable for women. For instance, I have established good relationships with the Imams, and religious and tribal leaders, using religious texts to substantiate and justify my work for women.

What is your main message for the younger generation, or women and girls who may want to follow your path?

Never give up fighting for your rights. Show persistence and perseverance in your work. Support each other so that you can reach the pinnacle of success.