Breaking barriers, with the power of paper and pen 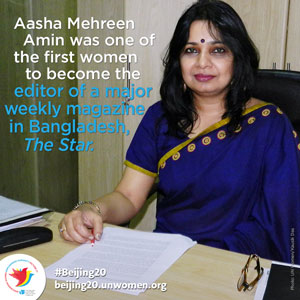 Born in Dhaka, Bangladesh to supportive and progressive parents, Aasha Mehreen Amin learned to read and write in English early in her life. She studied economics at Boston College, finding her rhythm in the analysis of the world’s current events and their links back to the state of her country. After joining The Daily Star, the most widely circulated English newspaper in Bangladesh as a feature writer, she went on a journalism fellowship to the University of California at Berkeley where she studied environmental and investigative journalism.
Going against the norm, she has risen in the field of media which is dominated by men in Bangladesh. An opinion-maker and thought leader, she has been the editor of the most read weekly magazine, The Star, a publication that is part of The Daily Star newspaper, for 18 years. Her satirical column “Postscript,” is a cornerstone of modern life in her country for the daring and progressive, and read by many. She is now the deputy editor of the Editorial and Op-ed section of The Daily Star, the country’s leading English newspaper, where she also pens a new column commenting on current events of the day entitled “No Strings Attached”. Her political commentary is courageous, insightful and powerful, speaking out for women’s rights, acceptance of all people, and anti-extremism.

Deciding to go into journalism was not an easy choice by any stretch of the imagination. Though Bangladesh is one of the hotspots of technology in rapidly emerging South Asia, the latest Demographic Health Survey points out that only 13 per cent of currently married women between the ages of 15-49 have been employed in the last year (2011), and there are even fewer women in decision-making roles in the labour force. Watchdog group Who Makes the News? noted in their last report in 2010 that less than 1 per cent of articles in newspapers were written by women, and of the 97 percent of women who broadcast news, only 3 percent were reporters.

When talking about her childhood, Mehreen Amin says that she was deeply influenced by traveling abroad with her family. Her father’s job involved being posted overseas several times and though she was shy, she loved to experience new countries and cultures. Her mother was a journalist, writer and poet who wrote in English and Bengali, and though she never directly encouraged her daughter to take up her craft, Amin was influenced by her mother’s fearlessness in speaking her mind.

A married mother of one, she says her education gave her a strong foundation for the work she does today. Regardless of the challenges that she and other women have faced in entering the sphere of media in a country where this is often thought of as an unusual act of bravery, she is grateful for all that she has. Here, she talks about what keeps her motivated to succeed.

Certain people have really prodded me along the way and given a lot of support. My parents, who never discouraged me in anything, my husband who has been a huge support – taking care of my child while I went to work and never complaining about the long hours. My boss, Mahfuz Anam the editor and publisher of The Daily Star who has always pushed me to take on new challenges and who is very adamant about promoting women. But the person who introduced me to journalism was Mr. Latifur Rahman – Chairperson and CEO of Transcom Group, [a company that owns the majority shares in The Daily Star], who instinctively knew that I would like journalism long before I knew it. He told me to give it a shot after I had returned from the U.S. I did – it was my first job and I have been in this newspaper for the last 24 years!

I don’t really see any obstacles in reaching my professional goals as such. I made choices. I didn’t join the main news section because I loved working in the magazine – it involved a lot of creativity and that appealed to me. Plus I wanted to have time – however little, for my child and husband.

There have, of course, been challenges – it is hard to get good writers sometimes. I have worked with innumerable teams – and that was the best part of the job. They were all young, energetic and full of creativity. Many of them were excellent writers. But sometimes managing people can be difficult especially when personalities clash.

Has being a woman affected your road to where you are today, and how? Did you experience discrimination?

I think I am probably the privileged few who have not faced the kind of discrimination my counterparts in other newspapers have faced. But yes, being a woman in such a male-dominated, chauvinistic society does have its challenges. In the workplace, sometimes I have felt that some male colleagues (in other departments) don’t take you very seriously although they are not really more qualified than you. Men in all positions, unconsciously consider a woman’s opinion as less significant. But for the most part, I cannot say that any of that has affected my work.

I have no idea what my contribution could be! I guess being a woman in a senior position is an indirect contribution to promoting women in journalism. I think The Star magazine, of which I was the editor for almost 18 years, has been my greatest contribution. It has provided readers with stories on so many issues that are relevant to them, on people who have contributed enormously to society, on social evils that we don’t really talk about, and also an idea about all the positive things that are going on in this country. It also provided a platform for writers to explore their creativity. I worked extremely hard to create this magazine and I have had a lot of very positive feedback from readers, so that makes me feel quite proud of the Star, when I was its editor. I also think people like my writing – because sometimes I make them laugh (which gives me immense pleasure) and sometimes I make them think (which is very humbling). I love writing, so it’s nice when people appreciate it.

It’s a man’s world, no doubt, but if you work hard at developing your skills – whatever they may be – writing, editing, reporting, painting or working in a bank – you have to be extra efficient, extra capable. Most of all, you have to be professional. It’s hard because women have so many other responsibilities at home and they will always want to be with their families, but that cannot come in the way of your professional duties. You have to prove that you have what it takes to do the job and to do it better than others.