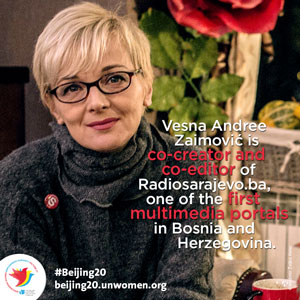 In a war-ravaged nation, she is one of the few who has made it to a top media position. Constantly reinventing herself, her journey has taken many turns. Starting her academic life at the Academy of Music in Sarajevo, Vesna Andree Zaimović graduated with a degree in Musicology in 2003, just as the  the aftermath of the conflict that plagued Bosnia and Herzegovina from 1992-1996 was ending. Some say the conflict began even before that, with divisions widening between various ethnic and religious groups.

It was a difficult time in her country's history, with families torn apart and careers ending even before they could start. Andree Zaimović took up any work she could during that tumultuous post-conflict period, from production assistant to public relations representative, to working as a journalist, and used her creativity to foster a sense of self-awareness and independence. She also used her skills to teach guitar lessons throughout the conflict, and never stopped working towards her goals of pursuing new media space and contributing to the music and arts scene in Sarajevo. Along the way, she was also trusted to lead the national delegation in the well-known Eurovision song contest for a few years, ensuring that her country was represented in the pan-European competition.

Sensing the public’s hunger for information, she co-created the Radio Sarajevo web portal, which has become one of the most visited websites in the country, to provide unbiased news on current events that matter. In her late 40s today, she has risen to the top of her profession, taking the experience of hardship and turning it into something tangible in the pages of history.

A trailblazer in independent web-based media, she uses her status to also draw attention to human rights guaranteed to citizens of her ethnically diverse country through Manjine.ba, considered a ground-breaking website for creating one of the first online communities in the country. This site was also the first to create media space for ethnic minorities, people with disabilities, those living in poverty and the LGBT community, and to tackle issues of discrimination in the Bosnian and Herzegovinian media front.

Always seeking to give back to the community, she works with her team to train others in media literacy and to use the power of new technologies to promote human rights. Latest in her efforts has been the development of powerful materials on ending violence against women, with data driven infographics, to further advocacy around the specific challenges women face in the current landscape. Here, she discusses how women’s presence is felt in the media, noting that they are sometimes left out of leadership positions due to their multiple roles in society and the family.

Some of it is family tradition, since my father was a very versatile man who was curious about many things until the end of his life. At the same time, he had excellent organizational skills that allowed him to find time for everything he wanted to do, and time for his family as well. I inherited some of his traits. Another important factor is the support of my husband, with whom I have built a sound partnership in which we enrich and support each other. Finally, there is also my constant craving for new knowledge, development, and an active life. I want everything I do to be good and useful for as many people as possible. I want to push the limits in my field.

The biggest obstacle was the war in Bosnia and Herzegovina. It took many lives, destroyed many families, broke up many friendships and terminated many careers. I was no exception – I had to start over several times during that period. In a way, it made me stronger, because I learned that I should not stick to one path and one profession only. I have a degree in musicology, but during that time I also worked as a journalist, reporter, production assistant. After I went to Slovenia, where I had my first and second child, I worked as a guitar teacher. It was all very educational for me.

I grew up in a family of music lovers and I was an active musician. Due to my parents’ school breaks, we travelled a lot, and that is something for which I am very grateful. I had some body and weight issues in childhood, and it was a huge body image problem. You know, that tradition of mothers, grandmothers and aunts worrying that “the child might be hungry”. I lost weight after the age of 20. I spent my 30s in “system restoration” after the war and raising my children. Only in my 40s did I discover a love for sports. I learned to snowboard at 43, and took up active swimming at 45.

Since I work in the online sector, a sector that is constantly changing, I learn every day, from people younger than I. I find great inspiration in books, music, theater and art. I see them as a need rather than luxury. I believe that culture and art may inspire kindness and tolerance in people and help us find balance. Finally, I am inspired by many women around me, especially my sister, friends and co-workers.

How do you cope being a woman in your area of work?

Women are predominant in the media in Bosnia and Herzegovina, but at the positions of journalists or mid-level editors. There are less of them in managerial positions. I believe that women are still taken less seriously than men, especially if women are polite and kind. Big business deals are largely made at “male” social events – business lunches, dinners, and VIP sections at stadiums. It is the quiet discrimination that, formally, does not exist.

Community often has expectations of us that are not the result of actual needs, but tradition, customs or habit. We feel guilty for not meeting them. I think it is more important to develop your own personality and have your own expectations of yourself. It is a wonderful feeling when you can prove to yourself that you are able to achieve some goals. My message to the youth is that they should never stop learning, inquiring, asking questions and developing their personalities. The message is that they should be responsible to themselves and others, active, live their lives to the maximum and do the best they can.

Related News
27/10/2015
Creating new pathways, in the skies and on the ground
28/05/2015
Charting new territory on the minefields
01/04/2015
Saving lives through scientific research
01/04/2015
Creating history, building a rights culture
02/02/2015
Leading the way for women and girls with disabilities
END_OF_DOCUMENT_TOKEN_TO_BE_REPLACED