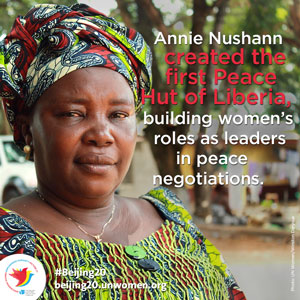 During the civil war in Liberia, with bullets flying overhead, she managed to mobilize hundreds of women to cross from her rural Liberian village of Totota to the rebel held territory in western Liberia during the civil conflict, a move that was thought of as unusual. Annie Nushann, a women’s rights activist and mother of 10 children, went on to defy death as she moved through the heart of the conflict in order to establish the first Peace Hut and Women’s Empowerment Centre in Liberia.  The Peace Hut was the first alternative for seeking justice in cases surrounding the rights of women, including sexual and gender-based violence. It not only provided a safe sanctuary for survivors of violence, but also a space for women-led peace negotiations and leadership training for women throughout the war and beyond.

Though the end of the war came in 2003 with the signing of a national peace agreement, other gender-based violence continued. Nushann continues to operate the Peace Huts and Women’s Empowerment Centres, which have increased to 17 now with 425 women trained in leadership, peacebuilding and conflict resolution. The women leaders address issues of gender-based violence, as well as problem solving of public and private matters for community members. Adding to her already full docket of work, the Women’s Empowerment Centres now offers economic empowerment training sessions for the women in small business management, literacy, tailoring clothes and creating bags and other products. Internationally acclaimed for her work, the Peace Huts have been visited by Liberian President Ellen Johnson Sirleaf, Nobel laureates, several UN officials, and are recognized for being catalysts for sustainable peace.

The daughter of a man who worked with trees to extract rubber-making materials, she was raised in what she calls a happy home, though her father earned less than two US dollars per day and she was kept busy with subsistence farming and housework as well. Nushann helped her father as best as she could, and chose to live with him after her parents’ divorced to continue her education. Eventually, she got married, opened a small business, and just as things were starting to settle for her, the civil conflict began in 1989. Fearing for her life, the lives of her children and her business, she was forced to seek refuge in the Ivory Coast.

However, these challenging circumstances made her think about the importance of peacebuilding, and how much she would like to change women’s status in her country. She braved the bullets, risked the lives of her children and returned to Liberia to mobilize women to call for an end to the civil strife and established the Peace Huts and Women’s Empowerment Centres. Though her husband constantly spoke of her “abandonment” of her domestic chores, she continues her work with determination and optimism.

It’s the fact that I am not highly educated. When I was growing up, I felt so intimidated to speak out in public. I couldn’t easily express myself because I didn’t have confidence in myself. I was shy and thought the best place for me at that time was at home and in my kitchen. When we started the advocacy, gradually I started learning to express my thoughts and to speak with confidence.  I admired Leymah Gbowee for how she addressed issues and said to myself, this is how I want to be. Look at me now….when I speak, I do not have time for whether you are a soldier, or president or whatsoever. My goal is to get the message about the situation of women and girls across and I am proud of myself. Another problem was the lack of money to do the things we wanted to do. We have to contribute our personal resources and this is a real big challenge.

To some extent, I can say yes because men, including my husband and community leaders found it difficult to accept that a woman like me will be engaging armed rebels without fear. Some felt we were trying to take their place and to prove that we were powerful but for us, it was about creating a peaceful society. It took some time and when they realized I was not giving up, they gradually began to appreciate our efforts.

What is your main message for the younger generation?

I want to advise our children especially the youth that it took the blood and sacrifice of ordinary women to bring peace to Liberia but sustaining that peace rests on their shoulders. The young men need to see themselves as protectors of women’s rights and not abusers. When they do that, Liberia will be a better place for all of us and our children.

What should the younger generation learn from you?

Young people should remain focused on their goals. It won’t be easy. There will be difficulties and setbacks, but they should be strong. If I explain some of the things we went through in our work, many people would not take the risk, but once you believe in what you are doing and you are sure of the benefits it will bring to your community, you should go for it.