Wielding the pen for independence, and independent journalism 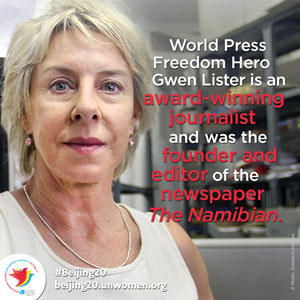 Gwen Lister’s life has been anything but predictable. Born in South Africa, but living most of her life in what is now known as Namibia, she was an early anti-apartheid activist in South Africa. Her passion for justice and democracy led her to establish The Windhoek Observer, a newspaper which reported on the struggle for freedom by Namibia from South Africa’s administration. Landing herself in the hot seat with South Africa’s government for publishing criticisms of its stance on apartheid and Namibia’s independence, the newspaper was summarily banned by the government and taken over by a new owner. All staff, including Lister, were dismissed. But her journey had only begun.

Valuing freedom of press as a necessity, she raised funds for a fresh newspaper, and legendary newspaper, The Namibian was born.  The paper was an effort to uphold the UN settlement plan for Namibia through honest and investigative journalism, bringing many triumphs, as well as danger in its wake.  It caused uproar within the country, and the offices were nearly burned to the ground twice. Lister continued to risk everything she had for the paper and for her advocacy supporting the country’s independence, as assassination attempts, arrests and harassment racked her life.

Today, she is an internationally renowned journalist, and winner of several prizes, including the Inter Press Service’s International Journalism award granted to journalists who dedicate their lives to advancing democracy, and the Courage in Journalism award from the International Women’s Media Foundation. In a tribute to her tireless work to courageously report on complex political situations, she was honoured with one of the most prestigious awards a journalist can receive: the World Press Freedom Hero award by the International Press Institute.

Determined in her belief that media must play the role of a watchdog, Lister has been repeatedly detained by government officials in an effort to discover her sources, shot at, nearly poisoned and has through it all established two newspapers and raised two children in the process. In 2011, she hired another editor, a Namibian, to edit The Namibian, and currently is the Chair of The Namibian Media Trust, which owns the newspaper. Below she shares her journey and talks about how she stood by her principles, even in the face of great peril.

Commitment, strong principles and dogged determination in tackling injustice have been key. At the start of my career, it was all about anti-apartheid activism and, as a young journalist, I wanted the world to know about the human rights violations being perpetrated against the black majority in Namibia. I also wanted to fight for independence from colonial rule [for Namibia from South African administration]. Later, it was also about the importance of establishing a free and independent media and ensuring access to information for the people of the country.

Has being a woman affected the road to where you are today, and how? Did you experience discrimination?

Quite honestly, there were times I had to forget that I was a woman, desensitize myself, and just get on with the job. As a woman with children, the relentless campaign against me by apartheid authorities, with constant intimidation, such as threatening phone calls, smear pamphlets, arrests, even while pregnant, were all designed to make me too afraid for myself and my family to continue. I’m not sure where I found the inner reserves of strength to carry on at times, but my conviction that I was doing the right thing, regardless of consequences, helped immensely.

How do you cope being a woman in your area of work?

With great difficulty in my early years in journalism in the 70s! I had to prove to a misogynistic editor that a woman could do the job of political journalism, and despite a baptism of fire and his eternal skepticism, I finally proved it to him. He publicly acknowledged that I had done my work, not only as well as, but even better than any man. There was also the added pressure on the home front with male partners who weren’t as supportive as they should be and who constantly berated me for doing what I did for a cause and putting my family at risk. It has become easier in latter years as society in general has accepted my role of being unafraid to speak out and my unrelenting commitment to doing the right thing.

That’s a difficult question for me to answer. Hopefully, I have led by example and shown people that it is necessary to put yourself in the frontlines to speak out against injustice of any kind. I personally believe in the words of Margaret Meade: “Never doubt that a small group of thoughtful, committed citizens can change the world. Indeed, it is the only thing that ever has.”

They should speak out for what is right and just, and find the courage to stand up for the weak and oppressed, and not to be so intoxicated by the material world that they remain silent.

Never apologize for being women. Dig down deep for the strength to find your passion and exercise compassion. Constantly improve your mind and work hard to realize your personal goals, undeterred by humiliation or insult.