Charting new territory on the minefields 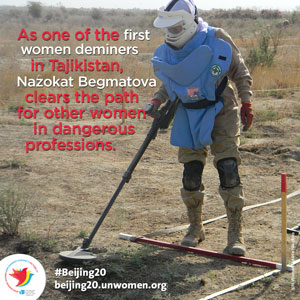 Nazokat Begmatova, a humanitarian deminer, didn’t have the opportunity to go to university, which reduced her chances of obtaining what would be widely considered ‘a good job,’ in her country. However, in contrast to the common practice in Tajikistan of marriage after school to alleviate economic challenges, she wanted financial independence and a job of her own. A year ago, she could not have imagined that she would work in a minefield every day, strapping on 25 kilograms of equipment to search for the very explosives that used to give her nightmares. She can now identify ten different types of mines just by sight, and over time, the minefield has become familiar territory.

As a humanitarian deminer on the first all-female demining team for the Norwegian People’s Aid (NPA), she also works with the national authorities to ensure the destruction of mines in heavily mined areas, a legacy of the Soviet-era conflict, which has claimed thousands of lives. It took more than three years for 24 women to be trained as the first female demining team in the country. In the end, only nine women managed to make it through the challenging selection procedure to build the first female demining team, not only in Tajikistan and Central Asia, but in the whole post-Soviet area with the NPA.

Begmatova’s team has ‘released’ around 70,000 square metres of landmine contaminated land. They have found and destroyed 777 antipersonnel mines, contributing significantly to land release operations along the Tajikistan-Afghanistan border. Now that she has had experience on the minefield, she plans to apply for a leadership position within a demining team as early as next year. Even leaving the community where she has spent all of her life is not a frightening step anymore, she says, because she is knows she is on the right track.

Here, she talks about how she has grown up in a society where women are thought of primarily as homemakers, and how her current occupation managed to change perceptions and myths in her community.

What do you think have been the most important factors that have helped in getting you where you are today?
The initial training by the NPA has been of crucial importance to me. Thankfully, being a woman was not a barrier to get the best preparation for my job. To the contrary, the trainers and mentors were even more motivated to provide me with their expertise in this area. It all depended on me and my desire to learn, to study more about mines. Having started, I just could not look back and could not accept any roadblocks. I guess it was my inspiration to achieve something as a women that brought me where I am now.

Perhaps the difficulty in this work comes from the hard physical conditions – the high temperatures that reach 40-45 degrees Celsius in the summer, the burning sun and dust. I have to wear 25 kilograms worth of equipment every day: helmet, safety vest, detectors. Moreover, my work is connected with intensive mental pressure. There are very strict rules one has to stick to. I have to be very focused and concentrated the whole time because any unprofessional move could be fatal. And of course, I have fear, but there has to be some fear in order to perform the best that I can.

My brother has been always very supportive of me. He has always told me to pursue my chosen path, even if it goes against social norms and is not perceived as typical for women. Now I know that we [women] have to be better than men, we always have to win over men. If they achieve something, it means we, as women, can also achieve it. Because we are equal.

Has being a woman affected your path to where you are today?

I have heard rumours from some of my male colleagues claiming that women could not deal with a job that was this difficult. They were waiting to see us fail. But this didn’t happen, and they had no reason to be negative. Now women have to be and are stronger than men. I have never thought that I could not perform the work because of the fact that I am a woman.

What is it like to be one of the few women in demining work, which is predominantly male?

I am proud of myself. When people ask me what I do, I proudly explain. Now when I come back from work, people look at me with respect. This was not easy to get. Through my work, I managed to change their attitudes towards a woman who performs an atypical female job.

What do you believe is your greatest contribution to society and to the community?

The idea that women belong at home, taking care of their children and men go to work and do big jobs has changed.  Now a lot of young women, even married ones, with children and even grandchildren ask how they can follow in my footsteps. The good thing is that some people already look at my job as being something normal. Having their wives at work, some husbands have even started to take care of the household and of their wives at the end of the workday.

When I find a mine, I am happy. I am happy because I know that at this moment, I probably saved somebody’s life. I gave my contribution to society.

They have to be active. They have to not give up, but walk ahead. Work gives you the chance to become independent, feel your personal freedom.

Related News
27/10/2015
Creating new pathways, in the skies and on the ground
18/05/2015
Galvanizing multimedia for multiple causes
01/04/2015
Saving lives through scientific research
01/04/2015
Creating history, building a rights culture
02/02/2015
Leading the way for women and girls with disabilities
END_OF_DOCUMENT_TOKEN_TO_BE_REPLACED