An Officer, and an activist 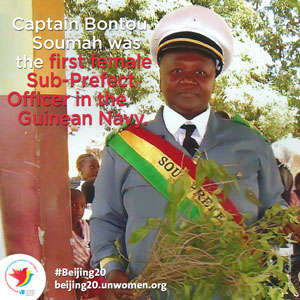 Overcoming cultural restraints and living as she chooses to do, she has been nicknamed the “Mother of the Guinean Navy”. As the first female Sub-Prefect Officer in the Navy in Guinea, a country known for its mineral wealth despite the poverty of its people, Captain Bontou Soumah knew as a young girl that she could work more diligently and expertly than most boys her age. Enroling in maritime college, she was able to join the Guinean Navy upon her graduation, with only three other women joining the Navy around the same time. She continued to rise through the ranks of the Navy and eventually won the appointment of Officer and Chevalier of the Order of Merit of the Republic in 2005, the first woman to do so, by order of the President.

“I am the eldest daughter in a family of 14. I was raised by my widowed mother, and there was plenty of work to go around,” she says. Due to her robust stature, her mother began to call her "mannish woman,” a name that stuck throughout most of her life. From a young age, Captain Soumah had to help her mother, taking on strenuous household chores usually given to boys, and still thanks her mother for instilling a positive and gender equal work ethic which she tries to instill in her five children as well.

She graduated from maritime school full of confidence and determination to lead an exciting life in the military, and was recruited into the Guinean Navy right away. She relished in the idea of receiving additional seafaring training abroad, but despite her capabilities, was initially denied a five-year period of higher training overseas because of her gender. But she remained undettered and told herself that she would overcome that challenge. “Women are more fearless and determined to climb to the top in order to complete their ambitions, ambitions that men do not suspect,” she said.

And overcome that challenge she did: first becoming a clerk and later the first female Sub-Prefect Naval Officer of one of the largest administrative areas of the Republic of Guinea, she gradually won accolades and the respect of her male colleagues. “There are now only four women Sub-Prefect Officers in the Navy out of a total of 303 posts in Guinea. There were no women in the armed forces when I underwent my baptism of fire in 1988. I was subject to the same demands of military life as men,” she says. Not surprisingly, she has had to deal with quite a few problems with male colleagues under her authority, but prefers to focus on the positive parts of life.

In her current role, she pays special attention to issues concerning equality between women and men, as well as the challenges associated with being young in post-conflict Guinea. Through grants from UN Women’s Fund for Gender Equality and other entities, she is working tirelessly to initiate grass-roots projects in literacy, solar salt production, and establishing workshops for professional skill-building for women. She works late into the evenings to cater to women’s demanding schedules to balance household work with professional pursuits. Due to HIV-related illnesses, as well as other types of health concerns in the region, many women have increasingly been taking on the breadwinner role in the family. “Women have to work inside and outside the home these days to make ends meet. I have been lucky to have the support of my husband in all of my endeavors, but some women are not so lucky.”

When asked what message she would like to give young women, she says, “It is courage and determination that give women the qualities they need to be able to realize their ambitions. Be courageous!”