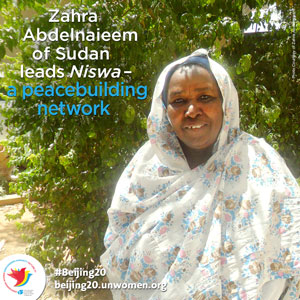 In El Fasher, the capital city of North Darfur, she was born in a family of six where she spent much of her childhood playing the role of a mediator and peacebuilding to her siblings. Today, Zahra Abdelnaieem is still a peacebuilder and activist, and now also the head of Niswa, a network of community, religious and political leaders that was originally established  to uphold women’s active involvement in the 2011 negotiations of the Darfur Peace Agreement. The conflict in Darfur, made more intense from the impact of flash floods and drought, has displaced hundreds of thousands of people, and casualties have mounted steadily. This makes a group like Niswa and its work extremely crucial.

Today, the group has expanded its scope from peace agreements to connect and work with conflict-affected groups that may have been on opposite sides, to bring them together towards peace and reconciliation. Though its hard work, with many setbacks, Abdelnaieem wakes up every morning with a positive attitude to forge peace, stimulate dialogue between contentious groups, and help survivors of gender-based violence, including those who have been displaced due to the conflict, find the medical services and community support that they need.

Educated at the University of Khartoum, she received her Bachelor’s degree in the 1970s, considered quite an accomplishment for women, since their role was usually limited to household chores. Her father passed away when she was young, and she lost her sister soon after. Despite these early losses, she says she feels lucky to have the family that she has, and enjoys spending time with her nieces and nephews.

As a longtime women’s civil rights activist, Abdelnaieem has negotiated community peace talks both before and during the time of conflict. She says a visit to South Africa in 2010 changed her life and introduced her to civil rights activists working on reconciliation throughout Africa. After years of pushing for greater political representation by women and women’s active involvement in peace talks, the year 2013 marked a milestone: two women officially joined the traditional administration structures as Omdas, or community leaders. She works closely with the Omdas to try to bring stability and peace to communities throughout Darfur. The adoption of UN Security Council resolution 1325 in 2000 stressed the importance of involving women in decision-making in peacebuilding and conflict prevention, a fact that Abdelnaieem says continues to inspire her to persistently put herself in the centre of conflict, with the hope of peace. In this interview, she gives us a glimpse into  her daily life in El Fasher, supporting survivors of gender-based violence due to the conflict, and working with various groups to create lasting peace.

Devotion to your cause and honesty with whomever you’re working with are necessary. I’m very grateful to now have the trust of so many, vastly different groups - from displaced persons, to rebel leaders to government officials. That is what I’m most proud of. It’s not an easy thing, to gain people’s trust, especially now, with the ongoing conflict. But I was able to gain the trust and respect of many opposing groups. I don’t shy away from speaking out. There is no fear when you are in the right.

What are some of the biggest obstacles you face in building peace?

In the early stages of the peace talks, women activists reached out to both sides of the table. Many didn’t acknowledge the importance of women taking part in the process. Now they realize that they need all of us. We all have the same goal in the end. Ultimately the people fighting on all sides of the conflict are the people of Darfur – we shouldn’t be killing ourselves.

My colleagues and I created Niswa, a network of women activists from various professions and backgrounds in Darfur. We have doctors, lawyers, politicians and so much more. We wanted to strengthen each other rather than each woman working alone. We found that the issues we raised met less resistance when we spoke as one. We became very active and very visible.

Before the peace talks even began, we reached out to women as soon as they began to arrive in the camps [for displaced persons]. We spoke to these communities about helping the survivors of gender-based violence rather than see them as a source of shame to be socially ostracized. We helped displaced women who are survivors of violence. We work together to help them get medical treatment, legal support, employment and follow up on their case files with the authorities so that that their rights aren’t lost.

There will always be people who will try to provoke you, but I don’t respond to them. I find strength in the support of my colleagues, and in the faith I have in the work we do. But my strong belief in the need for public service and the strong support I received from friends and family is wonderful. The women I work with, they are my sisters. We constantly check on each other and support each other.

We work to create a generation that will inherit this work from us. They need to be concerned with these issues. So I implore the younger generation of women to get more involved in public service. I hope they have the self-confidence and selflessness to always help those in less fortunate positions for as long as they are physically and mentally able of doing so.

I hope they view my work in a positive light. I’m grateful that my views and my work are held in some esteem by the displaced persons and policy-makers with whom I work. I am grateful for having earned their respect.