Forging ahead for free and equal elections 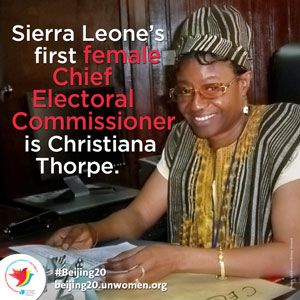 In the annals of Sierra Leone’s history, one comes across her name almost immediately:  after an eleven-year conflict that resulted in an unravelling of peace in her beloved country, she was the only female member of the Cabinet, serving as the Secretary of State for Education. Today, in her 60s, Christiana Thorpe is known as the leader who restructured the entire electoral system in Sierra Leone during almost ten years as the Chief Electoral Commissioner.

She spent much of her childhood playing teacher with the neighbourhood kids, while at the same time absorbing deep religious learnings from her grandmother. Growing into a teenager, she decided to join a convent in Ireland, a country where she says the sun looks and feels different than it does in her hometown. Earning her university degree there, and later her Master’s and Ph.D. in the British West Indies, she chose to return to Sierra Leone. Grateful for the experience of living abroad, she was ready to get down to the business of making education a broad and all-accepting pathway to greater freedom for women.

With a focus on helping girls finish high school, Thorpe began teaching. When students talked with her about the overwhelming pressures to drop out of school to help at home, she became the school’s principal to try to find innovative ways to keep girls in school to complete their education.

Thorpe’s passion to affect change gave birth to opportunities for higher learning for women and girls through her role as the Founding Chair of the Forum for African Women Educationalists (FAWE), Sierra Leone chapter, launched in 1995. FAWE gained prominence in the midst of the conflict for its ability to reach out to marginalized and displaced girls and women, as well as survivors of sexual abuse. The Forum eventually aided them in reintegrating into society in Guinea, where they took exile, through formal and non-formal education, with some stating their ambitions to follow in Thorpe’s footsteps.

Inexhaustible in her energies, she also became the Secretary of State for Education in 1993, where she introduced a new educational modalities aimed to help youth who may not respond well to formal learning.

On the heels of the conflict, Thorpe took on the position as Chief Electoral Commissioner nine months after the resignation of the previous Chairperson, with all four male commissioners vying for the post. When they realized that a woman had been appointed as the Chairperson, the nature of the battle was redirected against “this intruder”, as she referred to herself.

“It was a new world and I broke the glass ceiling”, said Thorpe, narrating her appointment and journey through the Electoral Commission.  “You can’t deal with men on emotional grounds, but with intelligence, integrity and hard work you can match up and outpace them at any time”, she said.

Many say she reinvented the institution into a symbol of free and equal elections from the ground up as the first Commissioner to introduce the Biometric Voter Registration system: a high-tech invention that prevents duplicate voter registration and ensures accuracy, and steered the post-conflict election process through 2007, a tumultuous and dangerous time in the country’s electoral history.

“I was determined to impact sanity into the electoral process by putting an end to the widespread impunity of ballot stuffing during elections”.

Looking back over her long and illustrious career, she is beginning to think about her next adventure, her new organization Reach In for the Stars, and says, “I look forward to rededicating my life to the disaffected and underprivileged in our society.  This new organization is aimed a notch higher to provide a support system for girls and women pursuing university education, and scholarships to help women and girls overcome widespread sexual harassment, to become confident and stay focused to be able to deliver alongside their male colleagues.”

“There’s hope for women in Sierra Leone, it’s time we rise up to our dignity as women and take the mantle of leadership for our country in whatever area we find ourselves.”