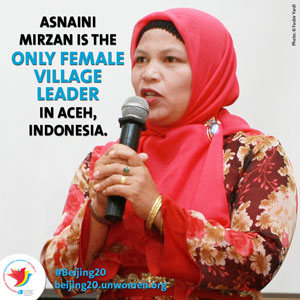 The simple house of Asnaini Mirzan, the first and only female village head in Aceh province, Indonesia, is never empty. Villagers come and go, asking her advice on their daily problems from family disputes to how to establish collective fish ponds used for small business groups. A farmer by trade, she says, “my house is no longer mine, it is home for my people”. It was the people of her rural village, Pegasing, who encouraged her to run for office as the head of the village council in 2011. Though most people were very supportive and recognized her leadership skills, some questioned her capabilities to govern, having never been led by a woman. Some even questioned her on why a woman would want to lead in the first place.
Traditionally, most villages in Indonesia are led by men, and those who opposed Mirzan’s election as village council leader cited the Gayonese tribe’s value of sumang, a cultural taboo limiting the interaction between women and men who are not related. "In my village, a man and a woman who are not married or related are prohibited from sitting next to each other and talking to each other. This is considered to be breaking the customary value of sumang,” she explained. She has to interact with male villagers to oversee peace and development in her village, and thus, had to overcome this hurdle daily.

Over time, people have become more accustomed to raising their concerns about the village to a woman leader, and Mirzan speaks highly of her husband’s support, and all that he has done, including travelling with her to remote areas to meet with villagers.

Her parents are also her inspiration: her father was a village leader, and she learned the art of public service from him. Her mother worked at home, which made her a more disciplined person, according to Mirzan. A married mother of three, Mirzan says that having children strengthened her resolve to lead, for she wanted to demonstrate to her children that a woman with little education could still be a woman in power. She said, “I didn’t receive any schooling beyond high school and I never intended to be a village leader, but when people put their trust in me, I knew that I must do it [run for head of the village council]”.

Mirzan not only won the elections, but also a prestigious Acehnese Women’s Award in 2012, given by the Balai Syura Ureung Inong Aceh(Centre for Women-Aceh).

A longstanding advocate of women’s and girls’ education, she lobbies with parents, encouraging them to value their daughters’ education as much as their sons’. Girls’ enrolment in primary school has improved since she took office. She has also developed  transparent administrative processes, such as obtaining birth certificates, a requirement to enroll children in school. “When I talked to women’s groups, they told me about their concerns for not having family registration cards and birth certificates. These issues have never been mentioned by men, and that is why we need to consult with women to explore the real issues in the community,” she said.

Greater ease in obtaining health care came as a result of allocating 50 per cent of the village’s funds to the women’s and children’s health service centre. She said, “It is truly important to allocate village funding for women, because often, they do not have enough time with the leaders to influence decision-making at the village level. Therefore, their needs are sometimes left behind. I talk directly to women’s groups. I ask them about the needs that the village should address, and based on their input, we set funding aside for these things, such as the health programme”.

When asked what advice she would give to women who want to succeed in the way in which she has, she says “women should open their minds and prove that they can do better than men. They should not be ashamed and never give up”.