Conquering the skies, the first woman pilot of Timor-Leste 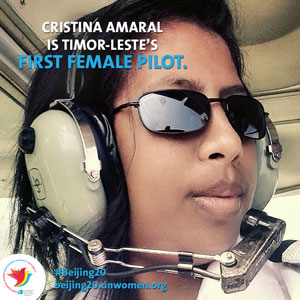 Imagine for a moment that you are stepping onto a plane.  The flight attendant takes your ticket and guides you to your seat where you buckle your seatbelt and settle in.  After the safety demonstration, you hear the female voice of your pilot as she announces that the plane is about to take off.

According to the International Society of Women Airline Pilots in 2015, women account for only 32 per cent of the world’s pilots, making it unlikely to hear a female voice announcing that they will be flying you to your next destination.  It is even more unlikely to hear a voice from Timor-Leste. Cristina Amaral chose to go against these odds, envisioning herself flying in the skies above her home country of Timor-Leste.

Growing up in the isolated district of Oeccuse, a coastal enclave, Amaral’s upbringing was deeply entrenched Timor-Leste’s history, fraught with stories of resistance against colonial powers and occupying forces. Women’s active role in the independence struggle and in peacebuilding efforts afterwards influenced her to pursue her goals in a predominantly male driven society, and gave her wisdom beyond her years.

However, the odds were still against her. Growing up as the eldest of five children, Amaral had to balance her responsibilities helping out at home with her desire to be at the top of her class. In a nation where only 21 per cent of girls are currently enrolled above grade eight, Amaral considers herself fortunate to have finished secondary school.

“My parents’ only expectation was that I should live a better life than the one they had lived,” said Amaral.  “I had a lot of support from my family. Their support is my power.” Upon her graduation, she found the opportunity to pursue a pilot training programme through a government scholarship that was announced. She knew this was her way into the career she had been dreaming of since she was a girl. Demonstrating her academic prowess, she topped a series of tests and proved herself to be one of the nation’s best applicants, winning a full scholarship.

“I always dreamed of becoming a pilot because I saw it as a way to do something for my country,” she says. “Timor-Leste is a new nation, and we don’t have many pilots so I thought to myself, ‘I would love to do that to help with my country’s development.’ I chose to spend less time dwelling on masculine stereotypes, and more time working towards flying.”

But the challenges were many, as the flight course was to be given in the English language. Her struggle to grasp the nuances of the training due to the language barrier forced Amaral to move from her family home in Timor-Leste to Indonesia to attend flight school. She learned all of the most up to date techniques in aerospace management in one of her native languages.

Graduating in 2014 to become Timor-Leste’s first female pilot, she joined the small but growing number of women successfully entering aviation.  “One of the things I love most about aviation is that you have to work like a family,” she said.  Amaral encourages women and men to think outside of the male pilot stereotype and as she puts it, “when you jump into the cockpit, the plane doesn’t care if you are a woman or a man”.

When asked what advice she would give to other women and girls hoping to enter male-dominated fields, Amaral said, “I would love to encourage young girls, especially girls from my country. It can be a difficult, [but] as we all know, we must learn to walk before we can run.  You must be brave, confident, and do everything you have to do to achieve your best and make your dreams come true".